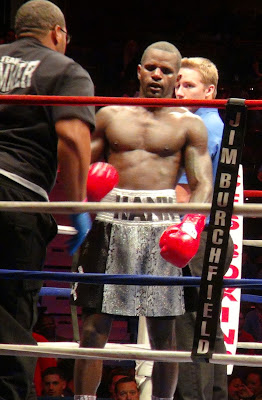 Demetrius Andrade, 153 1/2lbs, boxed aggressively in the opening frame against the heavily muscled Dario Pucheta, 152 1/2lbs. With only about thirty seconds gone in the first Boo Boo force-fed the Argentine a straight left that put him right on the seat of his pants. It was the first of three knockdowns Andrade scored in putting Pucheta away and securing the vacant WBO International
Super Welterweight belt. Andrade's long reach and speedy shots were far more than Pucheta could cope with and the second knockdown, a nasty double right-hand hook-then-uppercut in vintage Mike Tyson style was just the sort of violence Andrade's commercial image needed.

Pucheta pressed matters with a muscling style at the start of the second but Andrade blinded him with a pawing right-jab followed by a cracking overhand left that sent Pucheta to the canvas again. Ref. Danny Schiavone had seen enough and waved off the bout at :50 of round 2. Andrade gets back to boxing business with the kayo, improving to 22-0 (15), and grabs the WBO trinket which is likely to prove an important bargaining chip in today's title-happy marketing landscape.

Hammerin' Hank Lundy rebounded from a disputed July defeat to Mauricio Herrera with a fifth round TKO of Carlos Velasquez of Manauga, Nicaragua. Lundy beat Velasquez to the punch early and often, softening him up for more damaging left hooks to the head and body. In the final seconds of round four Lundy blasted Velasquez on the chin with a single left hook that hurt him but didn't finish him. Velasquez got right up and goaded Lundy into bringing some more, but was saved by the gong to end the 4th. At the start of the fifth Hammerin' Hank roared out of his corner with guns blazing, landing big shots with both hands on a mostly defenseless Velasquez. Referee Harvey Dock stepped between them and waved off the fight at :23 seconds of the fifth.

Afterwards, Lundy attributed some of his success to a renewed focus and commitment to the boxing lifestyle through the help of his friend and another Philadelphian, Bernard Hopkins.

Undefeated super welterweight, Khiary Gray, of Worcester, MA, scored another early knockout in stopping Kevin Cooper, of South Carolina at early in round 2. Gray scored a picture-perfect knockdown with a left hook in the closing seconds of round number one but ran out of time when the bell sounded just when Cooper was allowed to continue. In round two Gray applied pressure and put Cooper down with a solid thumping right. Cooper beat the count but the referee had seen enough and halted the action. Gray improved to 10-0 (8) and hears the bell to start round 2 for the first time in 7 fights while Kevin Cooper fell to 1-4 (1).

New Haven's Josh Crespo, 128 3/4 lbs, scored a six round unanimous decision victory over 130 1/4 pound, Greg Coverson Jr of Detroit, MI. Crespo got off to an early lead, scoring a first round knockdown and landing chopping rights that appeared to hurt Coverson. In the second Crespo maintained the pressure, landing smart left hooks as he stepped around Coverson. But in the third Coverson started landing a jab, taking advantage of a tiring Josh Crespo. Over the second half of the fight Crespo was able to keep his hands busy enough to overcome his opponent's longer reach while landing combinations to stay ahead on the scorecards. After six the judges saw the fight at 58-55 and 60-53 x 2 all in favor of Crespo who improved to 5-2-3 (2) while Greg Coverson falls to 3-12-3 (2).

In the first bout of the night, Nathan Millier of New Brunswick, Canada, brought the fight right to Borngod Washington of Queens, NY. Millier attacked the body of Washington in the first and in the second drove him back into a neutral corner and opened up with both hands. Washington fired back, landing once or twice, but with Millier blasting away Washington seemed to relent a bit, sag back into the ropes and referee Danny Schiavone stepped in to rescue him with an eight-count. Washington immediately began shaking his right arm and wincing about what seemed to be a hurt shoulder. With Washington unable to continue Schiavone stopped the bout. Millier, who fought with famous boxing half-brothers Micky Ward and Dickie Eklund in his corner improved to 7-0-1 (5) while Borngod Washington fell to 3-17.


Demetrius Andrade from Mohegan Sun Arena after his win over Carlos Velasquez
Posted by K.O. Fantasy Boxing on Sunday, October 18, 2015

Posted by KOFantasyBoxing at 8:44 PM