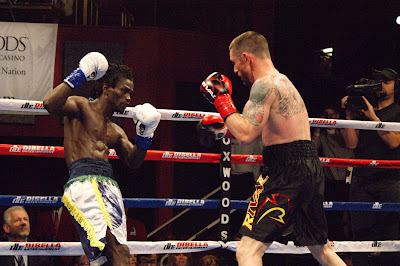 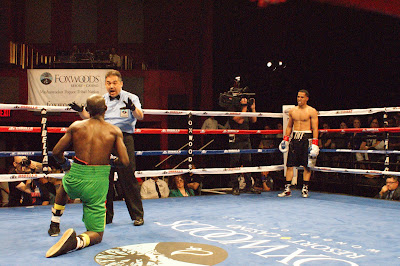 Khiry Todd pounding out a lopsided win here. I don't think Sarouna has won a round.

That was a little weird. Sarouna went down under pressure, it looked like he took a knee to clear his head but he stayed down for a 10 count

Khiry "TNT" Todd picks up the stoppage victory, TKO3 , and improves to 5-0 (5) while Nicolas Sarouna of falls to (9) #Boxing

Jen still in charge here but Lee has made a contest of it, the exchanges are heated now, ' face has reddened considerably

they are just slugging away here! this is just raw cavewoman versus cavewoman slugging in the center of the ring! wow! good stuff!

sixth and final round now. lands 2 sweeping overhand rights to start the frame!
double left hooks from @bolivian_queen, body and then head! 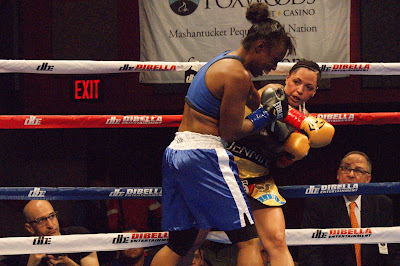 wow! that was fun! really slammed her with big bolting shots in the final thirty seconds

Myquan Williams showing off his skills here in round number one, catching Vasquez with sharp speedy punches from range

Williams may have hurt Vasquez at the end of that second round, he went right after him when he sensed it but the bell rang

If Williams starts to punish the body this one might end early.
Vasquez is a southpaw but he squares his shoulders up right in front of his opponent and Myquan Williams is having no trouble nailing him

This guy might just be pretty durable. Williams just busted him in the mouth with a hard straight right & Vasquez just ate it right up

wow! that was an exciting 3 minutes! Arias was in control the first minute but as the round wore on Shamalov found the range & hurt Arias

good round for Arias. He's #boxing landing quick shots and stepping away. Shamalov big and strong but got outpunched & outmaneuvered in rd2

sixth and final round coming up for this hard fought contest between unbeaten heavies... someone's O must go!! 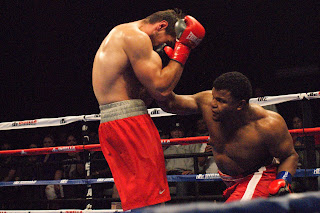 Arias is very quick on his feet for a man of some two hundred thirty pounds.

Arias is good at making this big man miss

I liked the speedy trickerations and jolting shots of Arias over the big, thumping swats of Shamalov in that one. Waiting on decision now

The better boxing of Arias triumphs over the blunt force trauma of Shamalov, scores were varied 60-54, 59-55 and 58-65 all for George Arias

Fatiou Fassinou is a speedy southpaw and he posed a pretty elusive target in round number one.

Remillard getting to Fassinou here in round 2. May have hurt him.
lots of holding and grappling and stumbling from Fassinou. This might end in a DQ if not a TKO first.

Fassinou went down at the bell to end round two. He looks extremely unsteady. He's fast but he's not taking punishment well at all

Fassinou looked exhausted at the end of the third. His trainer came out to get him & helped him back to the corner. Doctor checking him

very stern warning from ref, johnny callas about the holding. He said one more and you lose a point.

Oh, that's it! Fassinou's corner has done the wise thing and stopped this fight.

Remillard said he felt good and thinks with one more fight this year he'll be where he wants to be. Wants a rematch with @mikeygarcia

That's all from here, Fight-fans! Thanks for all the likes, retweets and follows! Peace!
Posted by KOFantasyBoxing at 2:38 PM