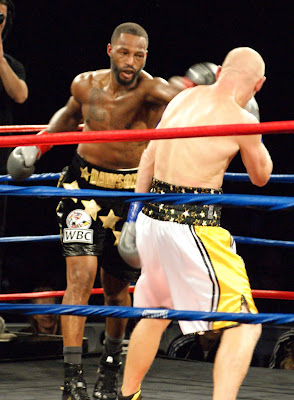 The room where boxing is held at Hartford's Convention Center is all cement and filled with dimly lit spaces with concessions kiosks set-up along the perimeter. It's reminiscent of a place where a despot's political opponents are herded and then machine-gunned or where Wesley Snipes' Blade might chase a dozen undead and wage the first skirmish of a vampire apocalypse. This Friday night it hosted current area prizefighters and the past CT luminaries of the ring came out to watch; at ringside were former undisputed Welterweight Champion Marlon Starling, top-ranked lightweight Israel Pito Cardona and top-ranked super-lightweight & welterweight Sucra Ray Oliveira.

Back in the ring just 103 days after his last win, the Elm City's Bad Chad Dawson scaled 175lbs for the 8-rounder versus Chaykovsky, Russia's Denis Grachev, also 175lbs, now fighting out of San Diego, CA. Dawson looked sharp and speedy of fist from the start, fighting cautiously from the southpaw stance in the early rounds. By the third he was throwing hard right hooks and thumping Grachev on his way in with straight lefts. The first and fourth were dull as both fighters looked for openings and Grachev struggled to get inside on the defensively superior Dawson. In the sixth when Dawson was landing heavier in the final minute Grachev caught him with a short shot the stunned Dawson badly. Grachev was unable to follow-up but it may have swung the round in his favor.
In the final rounds Dawson got right back to work behind his jab, making Grachev pay for his aggressiveness with straight lefts that blunted his forward movement.

Afterwards Dawson told the crowd he hoped for one more world title shot and that he feels more like he's 25 years old and not 37.


New London, CT, heavyweight Cassius Chaney remained undefeated with a first round one-punch kayo of Satinder Silgado of Arboletes, Colombia. The taller Chaney, 254lbs, pawed at Silgado, 228lbs, circled, then fired two quick nothing jabs to blind him followed by a pole-axe of a right cross that thumped aginst Silgado's chin putting him out and flat on his back. Chaney stood there looking down at his flattened opponent and for a second he struck a pose very similar to his namesake, and the Greatest of All Time, a young Cassius Clay.


Making his return to the prize ring for the first time since losing by stoppage in July on the Pacquiao-Thurman undercard, New Haven's Jimmy Williams had to settle for a draw against Jose Medina of Guadalajara, Mexico. Williams controlled the first two rounds with his jab and straight punches but as the rounds wore on Medina found shots of his own were effective, especially the jab he slammed Williams' chin with in the 3rd and fourth. Williams rebounded in the final two rounds, landing a heavy left hook in the fifth that seemed to hurt Medina.

At the end of six rounds the judges couldn't come to a satisfying conclusion; one seeing it 58-56 Williams, another 58-56 Medina and the third 57-57, even, resulting in a draw. For whatever it's worth, this observer saw it 58-56 for Jimmy Williams but the third and sixth were very close.


New Britain's Nathan Martinez, 123lbs, defeated Steve Garagarza, also 123lbs, of Houston, TX, in the most exciting fight of the night. Both fighters dispensed with any semblance of a feeling-out round, meeting in ring center and opening up with both hands to exchange power-shots. Martinez's blows looked harder immediately but Garagarza seemed to steel himself against them and weathered the heaviest blasts. At times Garagarza appeared the busier fighter but it was Martinez landing the more damaging blows, especially in the final round when it appeared he was close to scoring a knockdown.


Hartford's Sharad Collier, 133lbs, defeated Glenn Mitchell, 131lbs, of Steubenville, OH, by fourth round TKO. Collier got off the deck from a flash knockdown in round one, only to come right back and score one of his own before round's end. Mitchell was so badly buzzed he even tackled Collier to avoid being stopped. In the third Collier stalked Mitchell and had he been in slightly better shape he may have been able to stop him in the third but he looked arm-weary and drained from chasing Mitchell.

In the fourth Collier closed the show and when he started nailing Mitchell cleanly again referee Mike Ortega stepped in and called it off at 2:12 of round number 4.


Jahvel Joseph, 171lbs of the Bronx, NY made a successful pro debut against Leandro Silva, 176lbs, of Sao Paolo, Brazil. Joseph brought quite a group of supporters to Hartford and they cheered for him enthusiastically throughout his first fight. Silva was never hurt but was nailed repeatedly by speedy slashing shots from his taller quicker opponent. Joseph controlled the pace and progress of the bout from the start and at the end of four was rewarded for his efforts. The judges saw it 40-36 x 2 and 39-37, all for Jahvel Joseph, now 1-0, while Leandro Silva dropped to 1-3 (1).


In the first bout of the night Jalen Renaud, 153lbs, of Springfield, MA, defeated Maceo Crowder, 160 1/2 lbs, of Roxbury, MA, by four round unanimous decision. Crowder was dropped in the first, got up but seemed to be fighting at the pace required for a six rounder while Renaud was the far busier and more effective through the scheduled four. At the finish the scorecards were 40-35 x 3 all in favor of Renaud, now 2-0, while Crowder leaves with a record of 2-3 (1).
Posted by KOFantasyBoxing at 11:16 AM