Although once beaten, Comanche Boy Tahdooahnippah vows he will return

Suffering a loss is inevitable. That's what life teaches us all. Perhaps no one knows that better than the Native American Indian.

Middleweight boxer George “Comanche Boy” Tahdooahnippah suffered his first defeat as a professional boxer in the Main Event of a Friday Night Fights card at the Mohegan Sun Arena on February 15th. That night Delvin Rodriguez of Danbury Connecticut, eager to rebound from his June loss to Austin Trout, battered Tahdooahnippah for six rounds but was never able to get him down.

BillyCBoxing.com spoke with Tahdooahnippah by phone just days after the loss, once the Comanche Boy had returned home to Lawton, Oklahoma.

"I'm feeling good, back at home, back in the plains recouping" Comanche Boy said.

"It obviously isn't the way I planned it or expected. But it is what it is. I've gotta take that loss and learn from it.”

Tahdooahnippah is looking back at what happened in New England and he thinks he knows what went wrong.

"I think I wasted a lot of time. Next time I just need to jump on there and just go. I don't feel like I ever got my feet going in the fight. I felt flat,” Tahdooahnippah described. “I let Delvin, you know, he dictated the pace. I set back and waited for something to happen…I should have just been worried about the first round. Normally I start fast and I didn't start that way. My game plan was to start with the jab and go from there and Delvin's game plan was to jump on me."

Despite being in tremendous shape, Tahdooahnippah was overly concerned with being extended the distance in the high profile bout against the most experienced opponent he’d met thus far as a professional.

"Everything was good for the fight but I'll be honest, I was nervous. I was fighting my first big fight against a world contender like Delvin and maybe I let my nerves get to me because I didn't fight to win the fight. I fought to survive. I had that in my mind, that we're going to go ten rounds, I gotta pace myself, I need to be calm and relaxed... I should have just went out there and banged, and just fought. But what I know now, hey, it'll be different the next time."

Versus Rodriguez, Tahdooahnippah came in lighter than ever before. But did that mean he over-trained, or left too much of himself in the gym preparing for the match-up? He doesn’t think so and what’s more is that he learned he can slim down to around 155 or so and intends to campaign at 154 when he returns to action, perhaps this June. At the smaller weight class and with the amount of preparation he puts himself through Tahdooahnippah needs to put more faith in his conditioning and drive out the anxieties about running out of wind.

"I trained for 8 weeks for this fight,” said Comanche Boy. “For some reason, somehow I had it in my mind that we were going to go ten rounds and I needed to preserve some energy till the end. Next time I'm not going to do that…if I give it my all the first round so be it."

And knowing what he knows now, he’s sure the long hours of preparation will insure there’s plenty of gas in his tank when he needs it. If proximity to the gym helps one stay in shape at all, then the Comanche Boy should certainly maintain the extreme level of fitness we saw on the 15th. Back in Oklahoma, Tahdooahnippah works full-time as a counselor in a diabetes prevention program for the Comanche Tribe. He creates and administers exercise routines, works out with his clients and is devoted to improving the health of his tribe both directly with individuals and symbolically as an inspiration to the Comanche Nation. 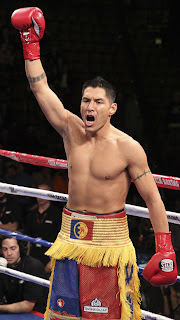 Comanche Boy plans to return this summer under promoter Joe DeGuardia and Tahdooahnippah knows wherever he goes he will have the support of his people just like those that supported him by trekking all the way to CT by bus.

"We had a charter bus full of Comanche that came up; we had a couple vans full… My tribal chairman and a couple tribal council leaders came up,” Tahdooahnippah explained. “It felt good. I knew I was in his [Rodriguez’] territory but that was great to have my people behind me.”

Tahdooahnippah carries the hopes of his people wherever he goes and it is not something he shrugs off or minimizes as do many of today’s athletes. Comanche Boy is proud of his motivational role as a prizefighter.

“It means a lot for me being a Native American professional athlete cuz there's a lot of kids that get to a point in their lives and they don’t ever excel, they don’t step up to a higher level, they just fall victim to the pressures of life... And it [the Rodriguez fight] didn't go the way I wanted it to go. But I got there and I’m gonna get there again... It lets these young native Americans know there's a lot of hope."

Perhaps the greatest lesson learned from loss is that often it is hope alone that persists, that endures, and struggles to keep us bright-eyed and eager to fight-back through the most awful suffering. Still on his feet, Tahdooahnippah keeps moving to a higher level.
Posted by KOFantasyBoxing at 8:34 PM