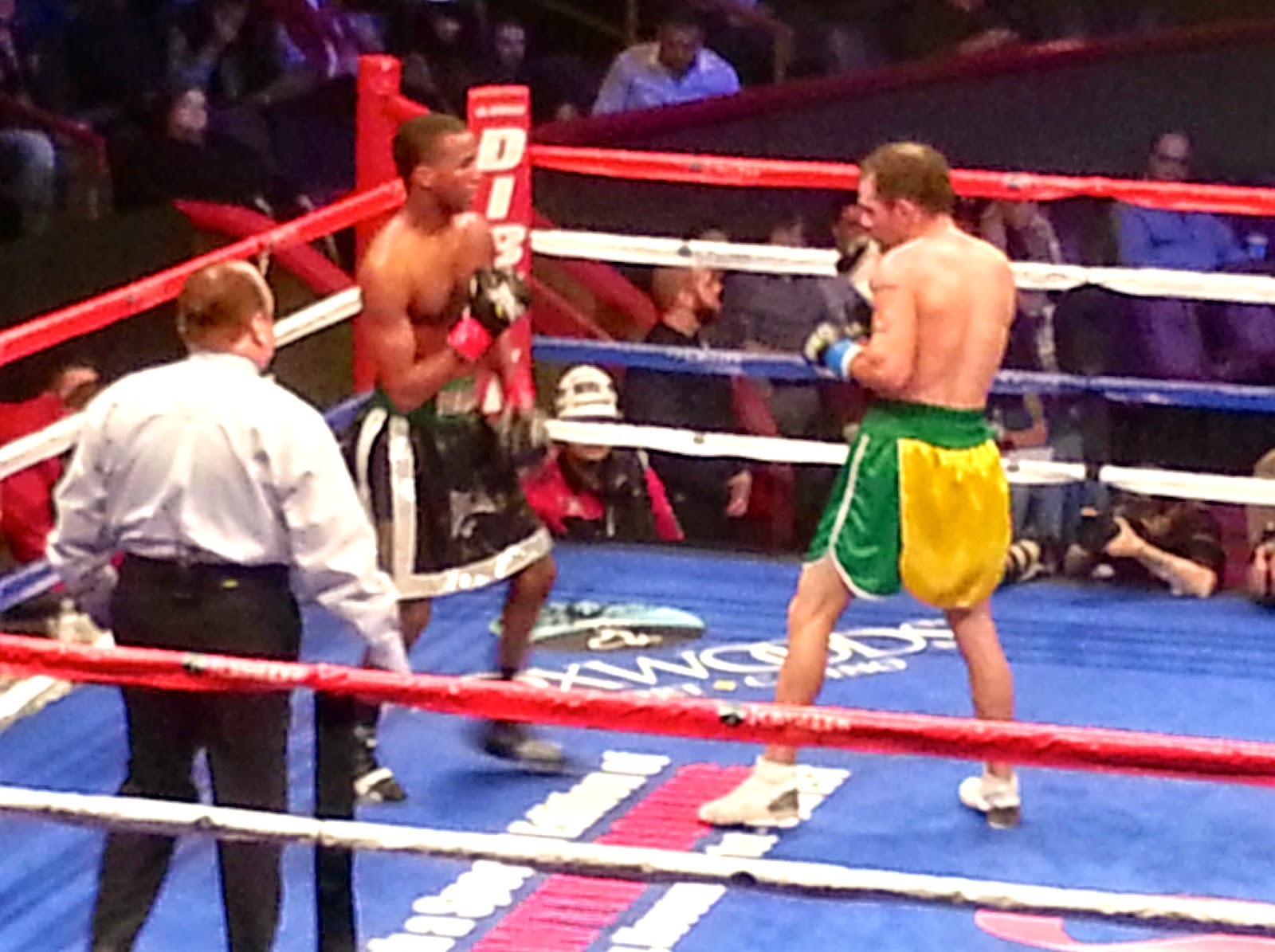 words and pictures by Alex Pierpaoli

On a rainy Saturday night in the woods, 's Rances Barthelemy defended his IBF Junior Lightweight title with a 12 round shut-out snore over 's Fernando Saucedo in the main event from the Fox Theater at Foxwoods Casino in It was the 2 supporting bouts that stole the show from the headliner, especially co-featured Junior Middleweight titlist Vanes Martirosyan, who successfully defended his WBO Inter-Continental Championship against Willie Nelson, while 's own Bad Chad Dawson was upset by Tommy Karpency in the Light Heavyweight special attraction bout that rounded out the triple-header aired live on Showtime.

One hundred thirty pound, Rances Barthelemy got off to a fast, aggressive start, slashing away at Fernando Saucedo with hooks and hard body shots. Saucedo, who fights out of , was unable to get his fists to any of the openings Barthelemy showed him at range. Despite holding his guard very low, Barthelemy was able to fling lefts and rights at Saucedo whenever he stepped too close.

But Barthelemy was content to "box" in this manner round after round, firing barrages of quick arm-punches meant to obscure the view and the attack of his opponent while "scoring" points with the judges. It worked. after 12 methodical and uninteresting rounds the three officials saw it, rightly, as a shut-out for Barthelemy with three scores of 120-108. But to call this a dominant display in a sport that puts a premium on violence and damage done is a disservice to so many who step through the ropes and offer their blood and bodies to the crowd. This was a light workout, an exhibition.

After the first 4 rounds it was clear Barthelemy was barely exerting himself and often times his punches were short of even landing, giving the main event the appearance of a high school hallway slap fight. The mystifying element on the night to this observer was trying to guess what kept a sizable portion of the crowd in their seats till the very end. With the outcome obvious after round 6 it could only be the need for a recharge before more gambling out on the casino floor that kept them in their seats.

In victory Barthelemy improves to 21-0 (12) and hopes for a unification bout with Mikey Garcia while Fernado Saucedo drops to 52-6-2 (8). 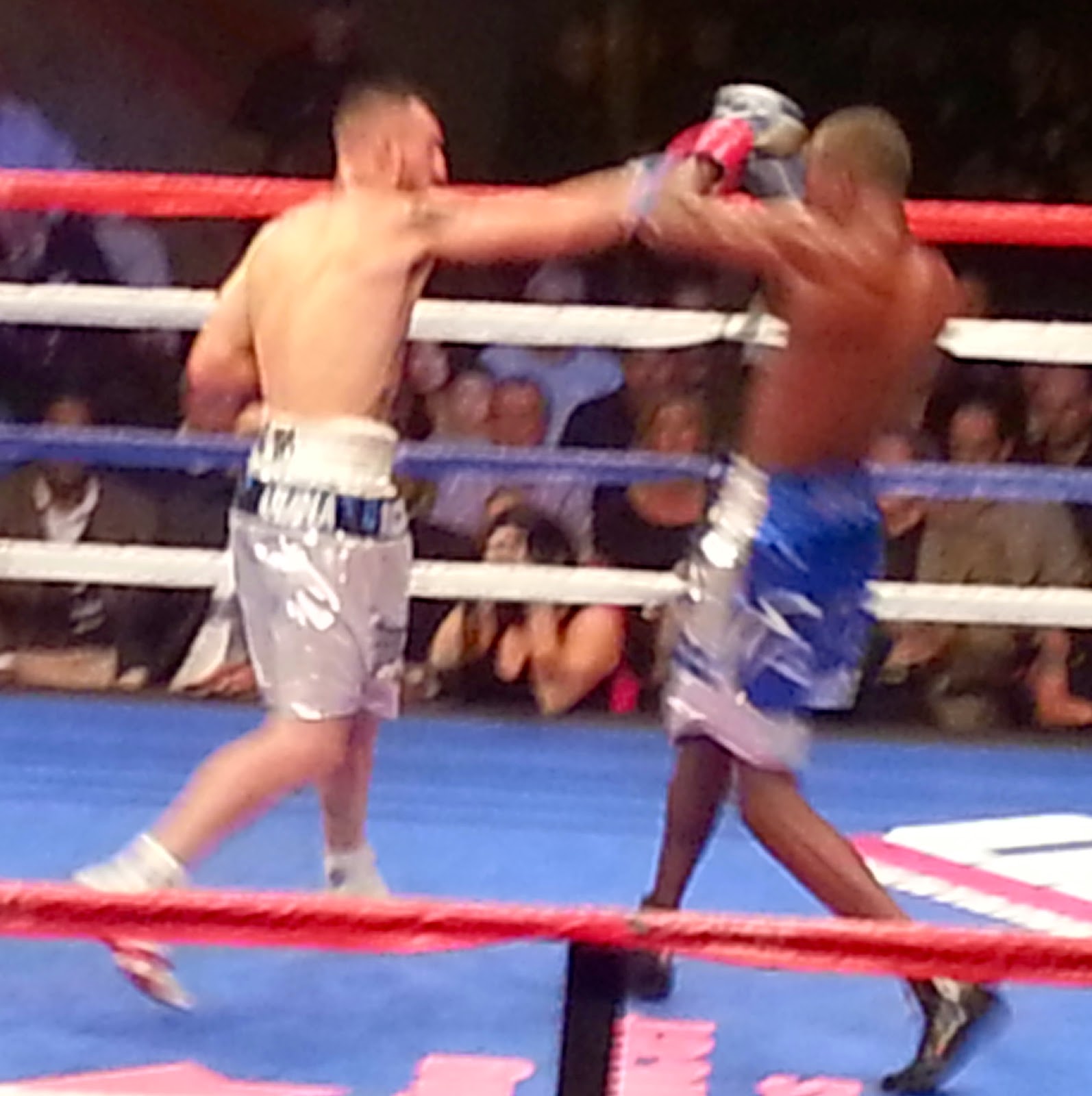 One hundred fifty three pound Vanes Martirosyan, of , won the fight of the night with a hard fought, exciting 10 round unanimous decision over Willie Nelson of . From the opening gong both men met each other at center ring and began trading. The taller, longer-armed Nelson foregoing the natural advantage of his physicality by electing to stand in close and trade blows with the shorter Armenian. They traded rounds back and forth in the early going, with Nelson's workrate seeming to get the better of some of the close rounds.

Both boxers were bleeding and bashing away with both hands in a big and brutal round eight. And it was in those final three frames when Martirosyan's heavier thumping shots secured the win in a close, entertaining slug-a-thon. When the scorecards are read they are 96-94 and 97-93 x 2 all in favor to Martirosyan who dedicated the bout to his promoter Dan Goosen, the brother of his trainer, Joe Goossen, who passed away from liver cancer just under one week ago. Martirosyan improved to 35-1-1 (21) while Willie Nelson dropped to (13).


When last fight fans saw Chad Dawson it was on the Showtime Extreme appetizer show to a Showtime Championship boxing night when a pudgy Bad Chad made quick work of George Blades. It was a forgettable occasion and in late sub Tommy Karpency, Team Dawson was hoping to pick up a decent victory in a winnable fight in front of a friendly CT crowd. But despite the hopes of mostly full venue, 's own Chad Dawson came up short on the scorecards after ten rounds against 's Tommy Karpency.

Scaling a chiseled 173lbs,  did show up in excellent shape but there was no intensity in his attack or urgency to his strategy and Karpency consistently landed the harder punches when the two southpaws exchanged. Midway through the fight it appeared 's left hand was hurting when he winced after landing it against the shoulder of Karpency. In the second half of the bout  rarely threw the left at all while Karpency made him pay with right hook-left hand blasts. The crowd urged Bad Chad to throw more punches with chants of DAWSON,  but with the bad hand all he could give them was jabs, few of which were all that punishing.

At the end of 10 judge Robert Paolino saw it 96-94 , overruled by judges Frank Lombardi and Julie Lederman who also saw it 96-94 for Tommy Karpency. Chad Dawson's career looks to be in freefall as he drops to 32-4 (18) while Tommy Karpency will try to capitalize on the upset win, now  (14).

Featherweight Jonathan "Solomon King" Guzman of Santo Domingo in the emained unbeaten by scoring a second round TKO over Ernesto Guerrero of Aqua Prieta, , . Guzman improved to 17-0 (17) while Guerrero dropped to 17-13 (11). 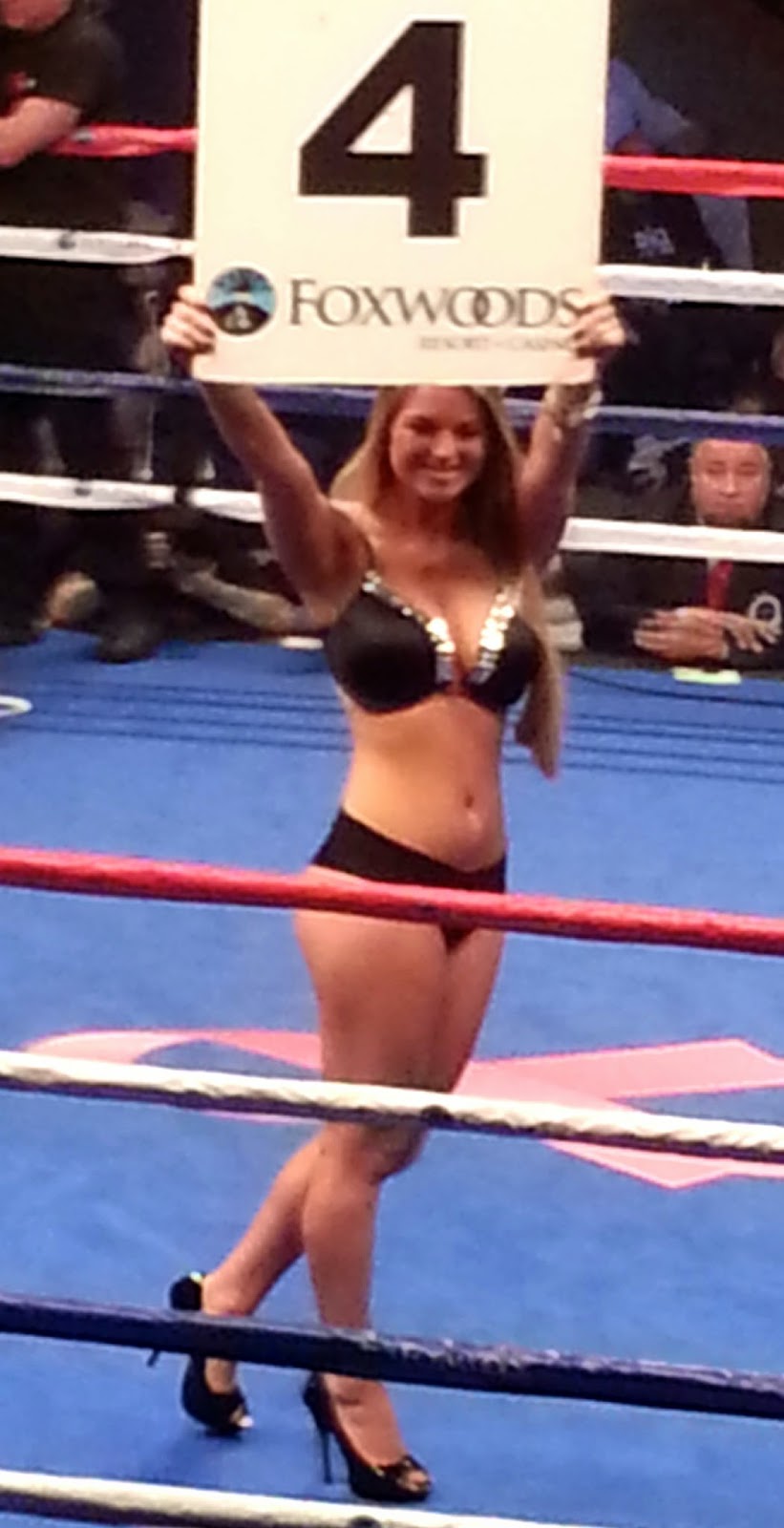 Junior middleweight Joseph Elegele of , picked up a six round split decision win over Johnathan Garcia of Aquada, . Elegele improved to 14-2 (10) and Garcia dropped to 4-10.

In a lightweight clash of Santiagos, "El Santo" , of , decisioned Arturo "Sonic" Santiago of Mayaguez, after four rounds. El Santo scored a knockdown in the first and looked to have Sonic in trouble but to his credit the rugged Puerto Rican was able to survive the distance in a lop-sided defeat. The scores were all 40-35 in favor of Milton Santiago, now 7-0 (3) while Arturo Santiago fell to (4). 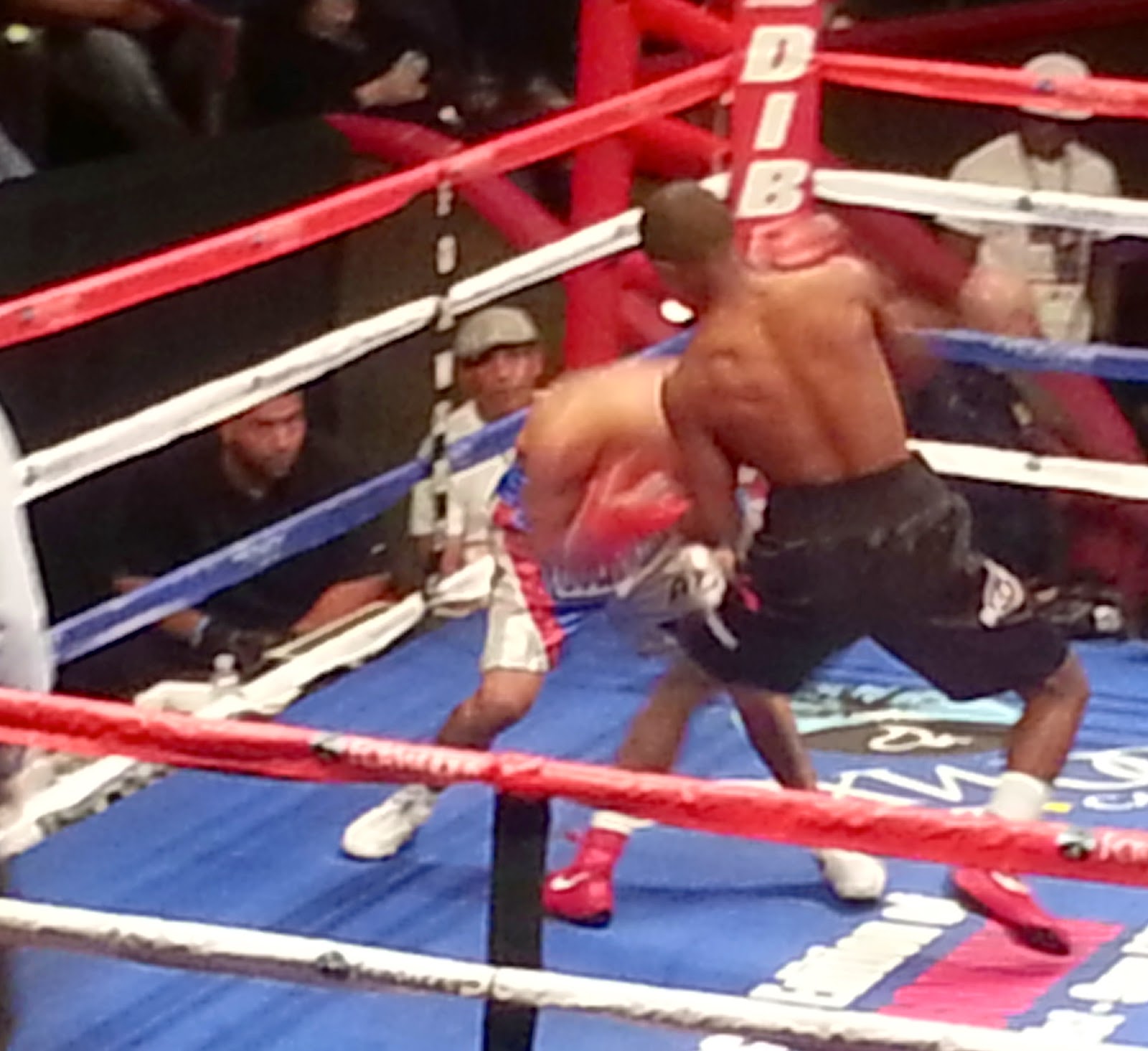 Middleweight, Kyrone "Shut-it-Down" Davis of Wilmington, Delaware blasted out Rick Morias of with a series of heavy left hooks and overhand rights, putting him down twice in his own corner before the end is called at of the first. improved to 5-0 (3) while Morias dropped to 1-2.

Junior featherweight Stephen Fulton of defeated Isaac Badger of , by TKO at the end of round number two. battered Badger for two solid rounds, dropping him twice and scoring a stoppage victory in his pro-debut. Badger remains without a win, now at 0-3.

Cruiserweight Earl Newman of , stopped Quintell Thompson of , MO, at of round 2. Newman picked up his first win in as many pro-fights while Thompson remains without a win at 1-3. 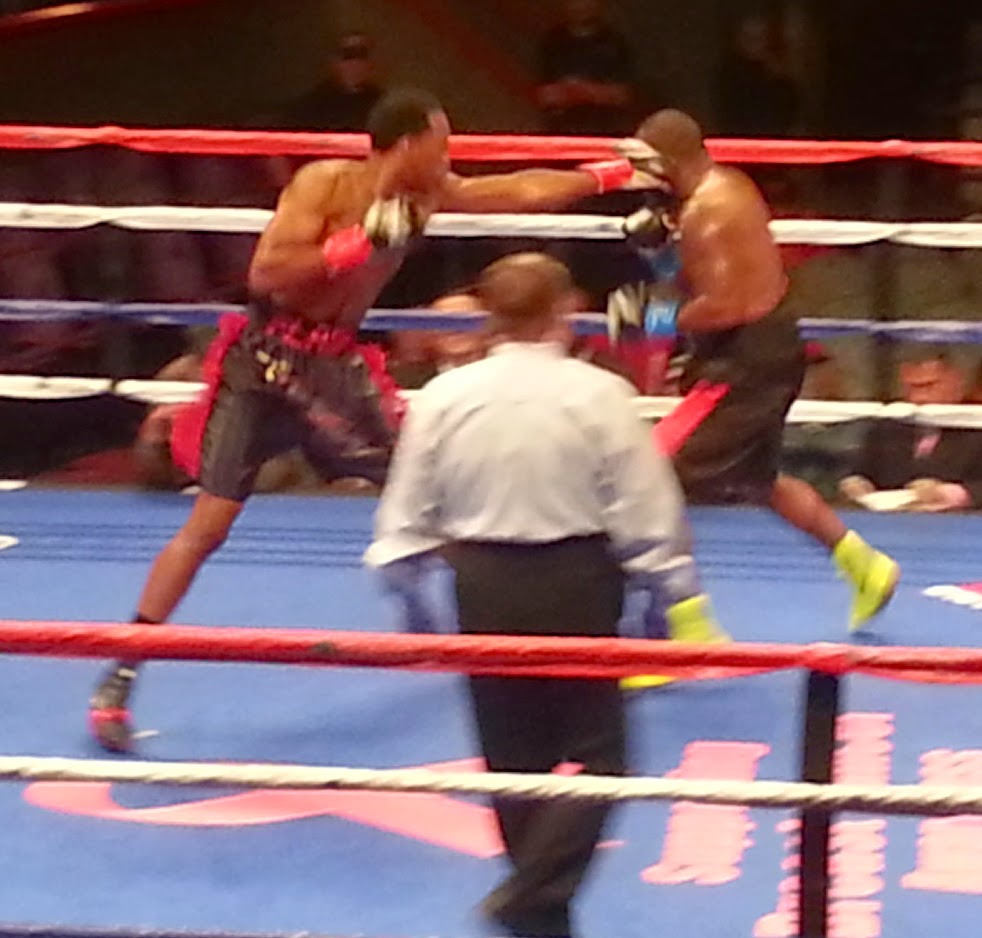 Two-hundred twenty-seven pound Paul "The Machine" Koon, of Philadelphia also made a successful pro-debut in defeating Hector Hyde of Miami, Florida, 238lbs, by first round TKO, 1:56, in the opening bout of the evening. Hyde dropped to 1-3.


Posted by KOFantasyBoxing at 2:31 AM