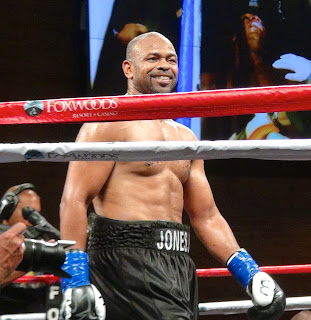 Once considered the pound-for-pound king of the sport RoyJones Jr. continues boxing at the age of 46 and more importantly after suffering increasingly damaging knockout losses. In victory over Eric Watkins, of , Jones notched his 8th win, fifth by
stoppage, since he was knocked cold in the final round by cruiserweight Dennis Lebedev in May of twenty-eleven. Jones intends a run at newly crowned WBO Cruiserweight Champ Krzyrsztof Glowacki, of , who scored a dramatic kayo victory over Marco Huck just 48 hours earlier on Friday night, August 14. Glowacki, 29 years old and undefeated in twenty-five fights with sixteen knockouts, is someone who can really harm this 46 year old version of Roy Jones Jr. Though he did try last night, Eric Watkins could not.

Jones and his seconds entered the ring without background music which added to the surreal effect of seeing the , superstar at this stage of his career. When once it was his defensive wizardry and lightning speed that bedazzled and bewildered, now we are left wondering if what we saw looked decent only in the right context. In the first round Jones set the pace and the distance while Watkins visibly shook off the jitters of facing a future Hall-of-Famer. With his arms held low in his traditional manner, Jones nailed Watkins with single blast counters and smashed him with rights to the ribs. Watkins kept his gloves very high which left his elbows out and exposed a lot of his mid-section for Jones to target.

All three officials gave Watkins the second, Judge Bill Morande also gave him the first, but all three agreed that Jones dominated from round three up until and including for a while after a monstrous left hook to the head of Watkins at the end of round 6. The time keeper sounded the ten second warning for the close of the round and a couple beats later Jones smashed him with a left hook that ended things. Watkins stiffened up and teetered over, his right arm jutting out straight grotesquely long after his body was horizontal on the canvas. Ref. Danny Schiavone waved the bout off at 2:59 of round six and improving the record of Roy Jones Jr to 62-8 (45). Eric Watkins dropped to (5) and goes home saying he went six with a legend of the ring.

In the co-feature, Jason Litzau, of , looked to have gotten the better of Hylon Williams, through 8 entertaining rounds but the officials couldn't agree on a winner and we had to settle for a draw. Litzau made the fight throughout, pressing the action and setting the pace and most importantly landing more punches. Williams used distance and defense and countered well but far too infrequently to grasp a victory. At the end of eight the officials had it 79-73 for Litzau, 77-75 for Williams and 76-76 even. KOFantasyBoxing scored the fight 78-76 for Litzau.

In the first bout of the night 's Mighty Mike Oliver got off to a great start against the fiery Jonathan Arrellano of Commerce, CA. Oliver, 129lbs, beat Arrellano to the punch effectively and peppered him with either hand, especially in round three. Perhaps gaining too much confidence from success, Oliver was even more aggressive in the fourth and in so doing opened himself up to greater risk. This seemed to be exactly what the larger Arrellano wanted and despite being out-landed throughout the fourth he was getting in some big shots of his own that were getting Oliver's attention.

Just seconds before the bell to end the fourth, Arrellano floored Oliver with a nasty left hook that had "Good Night" written all over it. Oliver was able to beat the count on very unsteady legs but Referee Joey Lupino stopped the action at the end of the rest period under the advice of Ringside Doctor Michael Schwartz, after Oliver was allotted the full minute and had still not sufficiently recovered.

The fight goes in the books as a TKO at of 4th which is confusing because the fourth ended as Oliver was getting up and the rest period took place. Wouldn't an official stoppage time of :01 of round 5 make more sense?

Regardless, Oliver dropped to (8) while Arrellano improves to (4).

Posted by KOFantasyBoxing at 1:37 AM