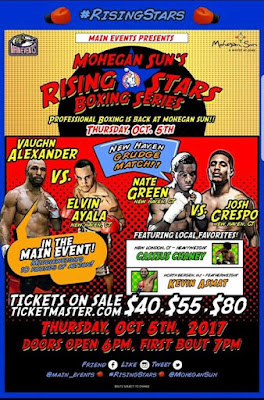 Promoter Main Events returned to Mohegan Sun tonight with their professional boxing series Rising Stars, featuring up and coming middleweight Vaughn Alexander of Saint Louis, MO, and loads of regional talent in significant match-ups. The co-featured attraction was an all New Haven bout with featherweight combatants Nate Green and Josh Crespo fighting for their own futures as well as bragging rights in the Elm City. The seven bout card included middleweights, featherweights, welterweights and a heavyweight contest all for the approval of a good-sized Thursday crowd for the Uncasville venue.

LeShawn "Lightning" Rodriguez, 159lbs, of Shirley, NY, defeated Romon Barber, 157lbs, of Wichita, KS, by third round knockout. Barber came to the ring with former 3 division champion Iran Barkley in his corner, unfortunately it didn't help. Rodriguez boxed patiently, picking his shots carefully on the aggressive, moving, wild-swinging Barber. Each round Rodriguez landed more frequently and with more and more power. In the third Rodriguez caught Barber with several short jolting blows to the head and Barber sort of folded to the canvas. He clambered to one knee and didn't start to rise until Ref. Mike Ortega reached about 9 and a half. Barber was sort of up at 10 and even complained a bit but it was clear he wanted no more.
With the win, Rodriguez is now 7-0 (6) while Barber falls to 7-16 (6).

Enriko Gogokhia, 148lbs, of Oxnard, CA, stopped Joaquin DeLaRosa, 149lbs, of Victoria, Mexico.
Gogokhia scored a knockdown seconds into round 2 off a long left hand. DeLaRosa was allowed to continue but with his quarry wounded, Gogokhia wasted no time in finishing him off. Along the ropes Gogokhia slammed DeLaRosa with an uppercut that snapped back his head badly, causing Ref. Ortega to step in and wave off the match at 1:27 of the second.
Gogokhia raises his record to 6-0 (3) while DeLaRosa falls to 6-3-1 (3).

Kevin Asmat, 128lbs, of North Bergen, NJ battled debuting Rafael Castillo, Rosendo, 122lbs, of the Bronx, NY, in an exciting four rounder that easily won the coveted, but unofficial, best bout of the night award. Rosendo got off to a strong start, crowding Asmat and pressing the action. As the rounds wore on Asmat was able to find the range on Rosendo and let him come forward into counters rather than allowing the aggressive Bronx fighter to score in close. Asmat won the fourth round big, especially hammering at Rosendo in the final twenty seconds. After four rounds the three judges saw the fight identically at 39-37 x 3 all in favor of Kevin Asmat.
Asmat raises his record to 3-1(2) while Rosendo starts his pro career at 0-1.

Cassius Chaney, 245lbs, of New London, CT defeated Jon Bolden, 250lbs, of Brooklyn, NY by six round unanimous decision. Things started badly for Chaney as Bolden charged out of his corner and blasted Chaney with two chopping right hands that caught him cold and put him down. Stunned but not shaken, Chaney rose from the knockdown and collected himself. In the second he was caught again with a hard uppercut that sent him reeling back into the ropes. Ref. Danny Schaivone correctly ruled it a knockdown as the ropes were all that held Chaney up. This time Chaney appeared to be a little more damaged but soon he was ripping Bolden with uppercuts of his own and looked to have hurt him before the bell to end the second. After suffering two knockdowns, mathematically Chaney needed to win every moment of the rest of the six round bout. And he did just that. Wisely using distance and his big overhand right, Chaney was able to blunt Bolden's rushes and had Bolden on his way to being gassed-out. There was a moment towards the end of the third when Chaney spent a little too much time in the corner catching, blocking and absorbing shots but it wasn't enough to give up the round on the official cards. Boxing wisely and slamming Bolden with sporadic overhand rights, Chaney was able to control the second half of the fight and learned a lot about himself along the way.
After six the scorecards were all the same at 56-55 x 3 all in favor of Cassius Chaney, now 11-0 (5). Jon Bolden goes back to Brooklyn at 8-12-1 (1).

Nate "The Great Won" Green, 123.5lbs, of New Haven, CT defeated Josh Crespo, 124lbs, also of New Haven, CT in a cross-city battle of New Haven boxing gyms. Green, a southpaw, out of Boxing In Faith Gym, used speedy shots and clever movement to control Crespo of Ring One Boxing. Green clearly frustrated Crespo who lost a point in round three when he whacked at Green with an overhead shot that thoroughly annoyed Referee Danny Schiavone. Green's quicker hands and tight turning had Crespo missing and following a beat or two behind the cross-city rival. In the third, Green was cut badly over his eye, a gash that may have been the same one he suffered just last month in a bout in Puerto Rico. Referee Schiavone ruled the cut was caused by an accidental headbutt and after round number 4 the ringside physician, Dr. Anthony Alessi visited Green's corner and determined the cut was too severe to allow the fight to continue. The bout was stopped and ruled a technical decision as four rounds had been completed and they went to the scorecards. All three judges it scored it exactly the same 40-35 x 3 all in favor of Nate Green. As good as Green looked through four, and there is no doubt he was in control, the result was dissatisfying especially considering it was the same result of their first encounter 6 years ago when Green won a unanimous four round decision. It would have been interesting to see if Crespo would have been able to mount a rally in the second half of the bout.
In the clash of Elm City boxers it is Nate "The Great Won" Green who wins bragging rights, now 10-0 (2), while Josh Crespo drops to 7-6-3 (3).
Afterwards, Chaney said he dreamed he had to get off the deck and battle back to win, and it happened.

Vaughn Alexander, 161lbs, of St. Louis, MO, stopped Elvin Ayala, 161lbs, of New Haven, CT, in the seventh round of the Main Event. Despite being in top condition and boxing well behind a busy jab, Elvin Ayala was outgunned against the speedy, burst-punching of Alexander. Alexander spent the first several rounds walking Ayala down and hammering him, especially to the body, whenever Ayala got along the ropes. Ayala did very well with the jab and in the fifth it looked as if he broke Alexander's nose. With blood streaming down and his mouth hanging open, Alexander's nose appeared visibly off-center, twisted a bit from a corkscrew jab of Ayala. In the sixth Alexander started throwing punches with bad intentions, looking to end things early. At one point Ayala slammed him with an uppercut directly on the damaged proboscis and Alexander barely flinched. Ayala seemed hesitant to open up on the damaged Alexander, perhaps expecting something in return, and he was right. In the seventh Ayala started aggressively but in doing so he stayed too long in the pocket in front of Alexander and halfway through the round the Missourian blasted Ayala with a right cross that made Ayala's legs go to jelly. Down he went and Referee Mike Ortega waved the fight off without a count. The official time was 1:42 of round number 7.
With the win Vaughn Alexander continues his rise in the middleweight division, now 11-0(8), while Elvin Ayala falls to 29-10-1 (13).
Posted by KOFantasyBoxing at 7:46 PM