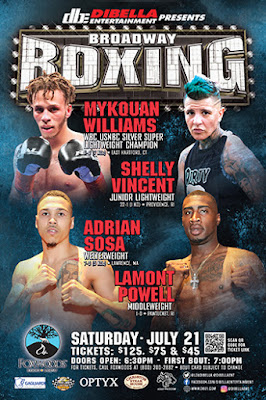 Mykquan Williams 140lbs, of East Hartford, CT defeated Matt Doherty 138lbs of Salem, MA by 8 round unanimous decision. Williams dropped Doherty twice in the opening round, the first time with a sizzling left hook that Doherty never saw coming which sat him down hard. And the second was a similar shot that made him fall forward, touching the canvas with both gloves. Doherty collected himself in round two and started landing chopping shots of his own. Williams remained in control with speedy combinations but after getting over the first round shock of Williams punches, Doherty became able to withstand even harder shots as the rounds went on. This was the 20 year old, Williams first time fighting eight rounds and his first time spending more than 3 minutes at the office in his last three fights, all of which ended by first round kayo. Doherty refused to be number four and kept trying despite absorbing lots of leather from Marvelous Mykquan. By round four there was some redness around the right eye of Williams where Doherty was catching him with lefts. At the end of round 5, Williams mocked Doherty, sticking his tongue out and grinning, frustrated Doherty was still refusing to go quietly. Williams cracked Doherty with two and three punch combinations repeatedly but was never again able to put him down or hurt him. Although warned several times by referee Shada Murdaugh the back and forth trash-talking lasted right till after the final bell when there was no traditional sportsmanlike embrace between the combatants. But Williams remained poised, patient and following a plan to victory over the distance with a durable, never-quit, 29 year old in front of him. Not a bad learning experience. The scorecards were 77-73 and 80-70 x 2 all in favor of Mykquan Williams.
Shelly Vincent 126lbs of Providence, RI squeaked past Calixta Silgado 124lbs of Tolu, Colombia by 8 round Majority Decision. In a rematch of an October Broadway Boxing clash in the same Fox Theater ring, Silgado and Vincent fell back into the similar roles of boxer versus puncher. Vincent pressed forward and Silgado thumped at her with both hands as she advanced. After a slow first, Vincent made the fight in the second, pressing Silgado back and banging at her head and body with both hands. In the final 30 seconds of the second, Silgado jammed a right uppercut up into Vincent's chin that got her attention. In the third, Vincent complained to ref. Danny Schiavone about Silgado using her elbows on Vincent as she bulled her way inside. Schiavoine warned Silgado for the elbows and Vincent for complaining and told them both to keep fighting. On this night Vincent's usual head movement on the way in and speedy flurries once inside were infrequent if not altogether absent. Whether due to Silgado's chopping counters or the fading reflexes in a now 39 year old Vincent was unclear. As the rounds wore on this observer saw Silgado landing more effectively over the eight round distance but the officials disagreed. The official scorecards were 76-76 by Don Trella overruled by scores of 78-74 in favor of Vincent by judges Steve Weisfeld and Robert Paolino.

Vincent improved to 23-1 (1) while Silgado fell to 16-10-3 (11). Addressing the crowd after the decision was read, Vincent talked over the boos and said she hoped for the rematch with Heather Hardy she was promised three years ago.


In a battle of unbeaten fighters, Hurshidbek Normatov 151lbs of Uzbekistan via Brooklyn, NY knocked out Alexis Gaytan 155lbs of Mission, TX in the most compelling fight of the night. Normatov, a decorated amateur, used quick-feet and sharp, speedy combinations to pepper Gaytan with 2-4 punch barrages before circling, quickly out of range only to do it again. But in the first, the strong and determined Gaytan caught Normatov with a counter right that stunned him. In the second round a clash of heads opened a horrible gash over the right eye of Gaytan. Normatov opens up with both hands when the fight resumes and by round's end Gaytan's face was awash in scarlet.
Gaytan remained clear-headed and determined in the corner as his team did an excellent job preventing what looked like a bad cut from becoming a factor. In the fourth, Gaytan tilted things back in his favor when he drove Normatov to the ropes with body shots and the Uzbek sort of sagged down and half-sat on them prompting Ref. Sharda Murdaugh to call it a knockdown. Normatov is up on his toes and boxing again in the fifth, landing frequently but expending lots of energy while Gaytan's well-timed body-shots are keeping the fight competitive. In the sixth and final round, as Gaytan pressed forward and ducked under a wide left from Normatov, he popped up to throw a hook but Normatov's follow-up right hook was already on the way and it crashed against the chin of Gaytan and turned his lights out. The Texan seemed to hang there a split second, before falling forward onto his face. The fight was stopped immediately at :41 of the 6th round.

Adrian Sosa 141lbs of Larence, MA stopped Darnell Pettis 137lbs of Cleveland, OH at 1:24 of the second round. The 23 year old Sosa uses the traditional cross-armed defense and quick, heavy counter punches to batter Pettis for nearly 4 and a half minutes. Pettis came to fight but Sosa was able to use Pettis' aggression aginst him, walking him right into hard counters. Pettis never hit the deck but he was badly staggered on legs of rubber in both rounds before a series of heavy unanswered blasts from Sosa forced Ref. Danny Schiavone step in and wave off the action.

Oscar Bonilla 138lbs of Bridgeport, CT defeated Seifullah "Jihad" Wise 140lbs of Philadelphia, PA. Both fighters charged out into an exchange for the first minute of the first, then seemed to steady themselves, picking their shots. The first was close with Bonilla fighting aggressively but Wise standing up to it and countering. In the second that changed. About a minute into the round Bonilla blasted Wise with a left hook to the jaw that forced him to go non-violent along the ropes. Bonnilla opened up with both hands and Wise just tried to cover up with limited success until Ref. Shada Murdaugh stepped in to halt the punishment at 1:20 of round 2.

Lennox Allen 171lbs, of Brooklyn, NY stopped Willis Lockett 173lbs of Tacoma Park, MD in the opening bout of the night. Allen put Lockett down in round one and again in the final seconds of the third. Ref. Danny Schiavone stopped the contest at 3:00 of round 3.