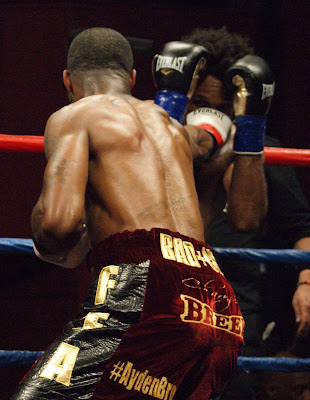 Last night at the Fox Theater in Foxwoods Resort and Casino in Uncasville, CT, New Haven, CT's Bad Chad Dawson returned to the ring after 27 months since losing to Andrezs Fonfara. Dawson struggled with rugged southpaw Quinton Rankin but scored a unanimous decision victory in the Main Event of the pro-am boxing card of more than six hours. In the professional co-feature The Mighty Midget, Tramaine Williams, also of New Haven, raised his unbeaten record to 18-0 defeating Neil Tabanao of the Philipines in a 10 round featherweight bout. More CT prize fighters saw action in five other bouts on the professional portion of the card and the night began with Promoter Jimmy Burchfield's Amateur Invitational, 8 amateur bouts held under the auspices of USA Boxing.

In the Main Event, Chad Dawson, 178lbs., defeated Quinton Rankin, 179lbs, of Charlotte, N.C. by eight round unanimous decision. Dawson a three time 175 pound titlist showed flashes of his former self especially in the early going but Rankin was determined to play spoiler. The all-southpaw contest saw some clutching and grappling in the fourth when Rankin grabbed his way out of trouble in response to several blasts from Bad Chad and at one point both men slumped into the ropes in a tackle.

In the fifth round Dawson was landing more often and heavier when Quinton Rankin caught him with an uppercut that sent him straight down into a crouch. Rankin fired a cuffing right at Dawson as he was down and then Referee Mike Ortega stepped in and did more meddling than officiating. He had ruled Dawson down, however there was never any eight count and the time Ortega took to warn Rankin for the shot he took at Dawson while he was on the deck seemed purposefully slow. The bout continued and Rankin looked to capitalize on his hurt opponent but he wasn't able to do it cleanly and he clipped Dawson with an elbow forcing Ref. Ortega to pause the action and penalize Rankin for the infraction.

Over the next three rounds Dawson shook off the cobwebs and kept Rankin from getting so close again by keeping a right jab in his face and chest. When the decision came at the end of eight it was a lopsided one with scores of 80-68, and 78-72 x 2.

than one at a time. Tabanao's well-timed offense made for some tangles of arms and elbows and Ref. Arthur Mercante Jr warned the featherweights for grappling on several occasions. If Tabanao couldn't get his fists to Williams head cleanly, at least by letting his own hands go he could prevent Williams from landing cleanly. Tabanao had his best round in the sixth when Williams tired a bit but Midget came on strong in the tenth landing several big left hand bolts, his best shots of the fight. When the scorecards were read it was unanimous in favor of the Mighty Midget, two judges saw it 99-91 and the third had it 98-92.

Jose Rivera, 161lbs, of Manchester, CT rushed after Luca Podda, 153lbs, of Miami, FL, driving him back along the ropes and hurting him in the first round. Podda was able to counter Rivera during his attack in the first and caused Rivera to hesitate at times. In the fifth Rivera scored a knockdown but Podda got up quickly and wasn't seriously hurt. At the end of six the judges saw it 59-54 x3 all for the CT fighter.

Nathan Martinez, 125lbs, of New Britain, CT defeated Jose Homar Rios, 127lbs, of Hawley, MN by four round unanimous decision. Both fighters landed big shots in the opening round but then Martinez did the bulk of the hurting for the rest of the 12 minute contest. The judges tabbed Martinez the victor by 3 scores of 40-36.

Oscar Bonilla on Bridgeport, CT 135lbs defeated Julio Perez of Worcester, MA 132lbs. in an entertaining clash that featured lots of punches landed but not a lot of damage done. Perez did most of the parrying but it was Bonilla's relentless pressure that carried the fight. After six the judges it all saw it in his favor by scores of 59-55.

Wilson Mascarenhas, 139lbs, of New Bedford, MA went up against debuting Anthony Ramirez of Philadelphia, PA, 138lbs., in a 4 round clash.  Mascarenhas kept his vocal fans happy as he controlled the bout with quicker, heavier hands throughout. At the end of four the officials had it 40-36 x 3 all in favor of the MA native.

Mascarenhas returns to New Bedford at 2-1 while Ramirez heads south to Phillie, now 0-1 as a pro.

Female bantamweights got the professional portion of the card started with a four rounder pitting debuting Marisa Belenchia of New Haven, CT,  110lbs., against Delaney Owen, 111lbs, of Clearwater, FL. Belenchia played forward-marching, aggressive "puncher" while Owen circled and fired straight punches in the role of "boxer" in the most exciting bout of the night. After four the judges saw it 40-36, and 39-37 x 2 all in favor of Belenchia, although this observer thought it looked more like a draw.