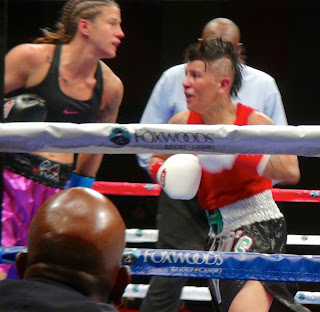 Machine Gun Mike Oliver looked a lot sharper tonight than he did this summer versus Billy Dib but it wasn't enough to come away with a win versus Cornelius Lock. Despite one judge's score of 78-74 in favor of Philadelphia's Cornelius Lock, the bout ended in a majority draw after the remaining ringside officials each had it 76-76. Lock did the better body punching throughout the bout and seemed to be landing the heavier shots. Oliver let his hands go in bursts, some of which may have stolen a couple close rounds, especially effective was his speedy right hook. But over the stretch this observer felt it was the stronger more consistent Lock who should have come away with the win. With the majority draw Oliver is now 26-5-1 (8) and Cornelius Lock falls to 21-6-2 (13). 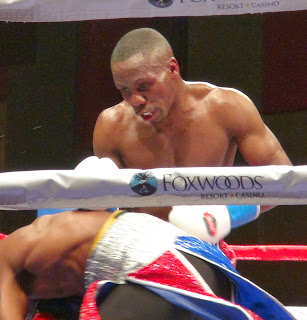 Female bantamweight Shelito Vincent of New London, CT, scored her first stoppage victory, not by concussion but by attrition over Alisah McPhee of British Columbia, Canada. After three rounds of competitive action, Vincent let her hands go with more abandon in the fourth, crashing hard overhand
rights and chopping hooks against the head of McPhee. Driving her into a neutral corner, Vincent kept landing while a stunned McPhee was rescued by the referee at 1:54 of the fourth round giving Vincent a TKO and raising her record to 10-0 (1), while McPhee fell to 2-1. 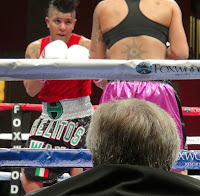 New Haven's Jimmy Williams escaped with a 4 round split decision victory over Evincii Dixon of Lancaster, PA. Dixon, a speedy southpaw, used his quick reflexes and distance to make himself an extremely elusive target for much of the bout. Williams walked Dixon down behind a jab-right hand but often wound up falling short with his punches. After 4 the judges saw it at 39-37 a piece, overruled by a second score of 39-37 for Williams who improved to 5-0-1 (2). Dixon returns to PA at 2-3-1 (1).

In a heated female flyweight contest Michelle Cook of Massena, NY, had to settle for a 4-round majority draw in pro-debut versus Marcia Agripino of Groton, CT. The scores were 39-37 for Cook, 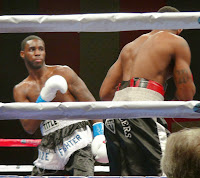 In the first professional bout of the night, heavyweight Donnie Palmer of Boston, MA, stopped rugged but out-gunned and out-conditioned Solomon Maye of New Haven, CT. Palmer improved to 3-0-1 (3) while Maye drops to 1-1 (1). 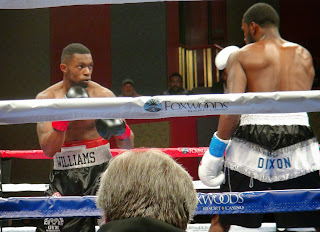 Bout 5: Jonathon Figueroa of Coondog Boxing in Meriden, CT, surged in the final round and a half to take a decision over Godfrey Campbell of New Haven, CT's Elephant-In-The-Room-Boxing Club.

The sixth amateur bout of the card was scratched when one of the combatants flunked the pre-fight medical exam due to high blood pressure. 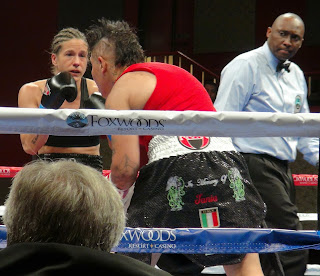 Posted by KOFantasyBoxing at 7:32 PM