On Saturday night live boxing was center stage inside Foxwoods' Fox Theater and here is a recounting of the live-tweets, made slightly more grammatical, from ringside.
Jimmy Burchfield's Classic Entertainment and Sports was the promoter of the 11 bout pro-am show live tweeted via https://twitter.com/TalkinBoxing and https://twitter.com/KOFantasyBoxing

Montalvo controlling the action and setting the pace in round one, they're fighting 3 minute rounds, 3 round bouts.
After a solid first half of round 2 from Montalvo, it's Allen driving Montalvo back into the ropes and scoring with both hands.
Allen smothered some of his own punches early, but found the distance late. Probably too late, most of the clean punches landed by Montalvo.
Waiting on the scores now, that was the first of six amateur contests here tonight, followed by six professional bouts.
No surprises with the decision, the first bout goes to the boxer from the red corner, Deydrei Montalvo of the Montalvo Boxing Association

2nd amateur bout, Lightweights, 132lbs, southpaw Izaih Melendez of East Hartford, CT, got the better of Edgar Figueroa of Hartford thru 1st 3 minute frame.
Very heated pace being set here by these lightweights, both men letting their hands go, Melendez doing much of the throwing & landing but… 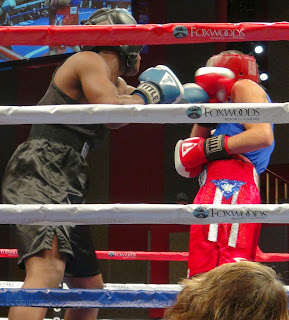 Figueroa is cool under pressure and looking for chances to counterpunch; meanwhile he's getting tagged, not hard, but they're points.
Some really good body punching being done by both fighters in round three.
Wow, that was an exciting 3rd round. This was a close fight, no doubt. Have to think the judges will give it to the busier fighter, Melendez
If Figueroa loses it won't be by much. Both these guys gave 100% and Figueroa looked to land heavier but that doesn't mean as much in amateurs. It's about contact not concussion.
Izaih Melendez gets the decision, have to think it was the busy pace he set and that southpaw straight left he landed with regularity.

Bout 3, lightweights, 132lbs, Victor DeJesus of New Britain, CT's Martinez Boxing versus Roberto Vega of New London's Whaling City Boxing.
Much more cautious first round from these speedy lightweights. Southpaw versus southpaw contest, not a lot of contact so far.
DeJesus has slammed Vega with several hard right hooks and there's a dribble of blood from Vega's nose; DeJesus controlling pace and countering well.
These two are switching back and forth from southpaw to orthodox, trying to get a bead on each other, Vega looks frustrated.
Well, this observer had the wrong idea on that bout…the judges tab Roberto Vega of Whaling City Boxing the winner over Victor DeJesus.
I thought DeJesus controlled the bout but the busier guy was certainly Vega. Busy always matters more than damage in the amateurs.

Bout 4, amateurs, Lightweights, 132lbs, William Foster of New Haven's Boxing In Faith, vs Irvin Gonzalez of the Worcester Boys & Girls Club.
Two rounds of spirited action, but not a lot of clean punches being landed by either guy, save for some good body work by Foster.
Foster, goes back to his corner after the bell to end the third with a big smile on his face. This bout looks to have been all his.
William Foster gets the call and the larger trophy after three hard fought rounds versus Irvin Gonzalez

Amateur Bout 5, Middles, 158lbs, Godfrey Campbell of New Haven's Elephant-in-the-room-Boxing Club vs. Jonathan Figueroa of Coondog Boxing in Meriden.
Campbell boxed a solid 1st rd, using straighter, stinging shots to press the action and control the pace; Figueroa looks to regroup in 2nd.
Campbell controlled the bulk of round 2 until he is tagged with a long lunging shot by Figueroa which seems to stun him. 3rd coming up...
Figueroa being very aggressive, Campbell throwing one shot and grabbing, one & grab, one & grab.
Figueroa closed the show and Campbell looked gassed in the last half of third especially. waiting on the scorecards…
Jonathon Figueroa gutted that one out! He takes the decision over Godfrey Campbell in final amateur bout of the night, the 6th was scratched.

For the first professional contest of the card we go the unlimited class, heavyweights; Donnie Palmer of Boston vs. Solomon Maye of New Haven, in a four-rounder.
Maye, the shorter, squatter fighter, bulling his way in on the taller Palmer; Maye connects with hard left-hook right hand in last minute of the first.
Maye lands another hard left hook to start the second that gets a roar from the crowd, but he doesn't follow up; Palmer jabbing. 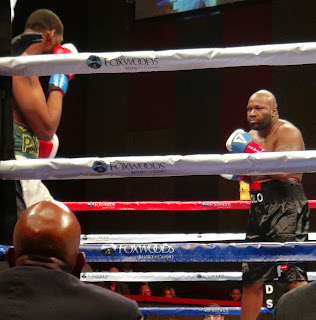 Palmer really seems to have sapped the strength of Maye with some hard one-twos and lots of grappling and leaning on his shorter foe.
Palmer lands a hard right & knocks the mouthpiece out of Maye's mouth. Maye is exhausted. Again he loses mouthpiece and his corner is warned.
Solomon Maye is absolutely gassed out here but he's got a decent chin and Palmer hasn't been able to string together enough heavy blasts to put Maye out.
Maye loses the mouthpiece again, and this time it costs him a point.
Donnie Palmer presses Solomon Maye back along ropes and keeps throwing, some landing, some missing, but Maye has nothing and isn't fighting back.
The referee stops the contest at 2:24 of round number four giving Donnie Palmer a TKO win. He improves to 3-0-1 (3) while Maye drops to 1-1.

Bout 2, female flyweights, Marcia Agripino of Groton, CT, vs Michelle Cook of Massena, NY. Cook is making her professional debut.
Very good first round as a professional for Cook. She boxed well and bloodied the nose of Agripino.
Cook's shots are straight and speedy and although Agripino had a much better second, it's still Michelle Cook landing crisper, cleaner blows thus far.
These women are throwing & this crowd is loving it here in round 2. Both fighters have drawn blood, Agripino's blows may be a bit harder.
Wow, that was a scorcher! Lots of leather thrown and Michelle Cook celebrates as if she won; this observer thinks she did. Although Agripino had a good fourth.
Scorecards read 39-37 for Michelle Cook, overruled by 38-38 x 2 for a majority draw. Cook starts her career at 0-0-1, Agripino leaves Foxwoods at 1-0-1.

Up next, four rounds, junior middles, Christian Lao of New Haven, CT, versus Joe Wilson Jr. of Hartford, CT.
Lao is cut on the bridge of the nose, right between the eyes. May have been a jab from Wilson that did it.
Wilson, a southpaw, caught Lao early in the opening frame, but by round's end Lao seems to have settled down a bit, gotten over the blood.
Their heads collide in the final seconds of round two, no visible damage results.
Christian Lao boxing behind a busy jab and he's the one dictating the pace in the third, while Wilson looks winded.
Wilson blocking a lot of the hooks and wide shots coming at him from Lao. Lao's success has been with the jab and unlikely it was enough.
Your scorecards: 39-37, 40-36, 38-38 and your winner by Majority Decision is Christian Lao who improves to 5-2-1 (2), Wilson Jr is now 1-1.

Bout 4, welterweights, 4 rds, Jimmy Williams of New Haven, CT versus Evincii Dixon of Lancaster, PA.
Dixon is a southpaw and tried to box cutesy in the first, while it was Williams making contact with a solid one-two. Feeling-out first round.
Williams is hesitating too much in the 2nd and his corner is exhorting him to let his hands go. "Put'em together, Jimmy. Put `em together."
Williams needs a big 4th & final round in this observer's opinion, Dixon up 2-1 on our card. Dixon is pot-shotting Williams with slashing hooks and left-hand blasts.
Williams not showing the urgency he may need here.
It'll be a surprise if Dixon gets decision but he looks to deserve it, but his style sure ain't thrilling. He did more slipping than smashing, more waiting and feinting than throwing.
The scorecard:39-37, 39-37 a piece, overruled by 39-37 in favor of New Haven's Jimmy Williams who improves to 5-0-1 (2), Dixon drops to 2-3-1 (1).

Vincent pressing the action here, McPhee boxing more conventionally while Vincent coming forward in her signature style, Punches-in-Bunches.
It’s been the women who have gotten this crowd on their feet here tonight! As Vincent & McPhee slug to end 3rd they hear pure enthusiasm from the fans!
McPhee's punches are straighter and more consistent but it's Vincent landing all the dramatic hooks and uppercuts and jolting overhand rights.
Wow! Shelito Vincent just scored her first stoppage victory when Ref Shuda Murdaugh halted the bout over a neutral corner with McPhee in trouble.
The official time is :52 second of round number 4, Shelito Vincent scores a TKO and improves to 10-0 (1) while Alisah McPhee takes the long trek home at 2-1.

Time for the Main Event, Mike Oliver of Hartford, CT, versus Cornelius Lock of Philadelphia, PA.
No feeling-out round for these two, they are throwing punches like they mean it. Lock's seem harder, Oliver's speedier; Lock edged that 1st rd.
Oliver scored with a lunging left in the last minute of the second, good body work from both men.
They slug along the ropes, Lock gets the better of it, their heads come together hard, but no cuts. Good action in the 3rd, Lock 2-1 on my card.
Oliver is the one looking to grab here, but Ref Johnny Callas making them fight, Oliver looks good but Lock is no slouch.
Lock drives Oliver into his own corner and Oliver blasts his way out.
Good action here and may have to credit mostly Callas and Lock for it, Oliver is looking to grab quite often when he's out of position but he can't.
A very close 6th round that Oliver may have stolen off of two right hooks right before the bell. Up till then Lock did great body work throughout.
In seventh, Callas gives Oliver a warning for holding. 1st warning.
And Callas just gave Oliver a second warning.
There's a cut around the left eye of Cornelius Lock, 8th and final round coming up.
Oliver starts the 8th circling, why? This fight is close. And not sure he's ahead.
8th ends with Oliver's corner asking him to get off the ropes, Lock pressing, their heads came together again in final seconds
The scorecards read 78-74, 76-76 x2 and Oliver-Lock ends in a Majority Draw. Not sure who won on the 78-74 card--announcer didn't say. Will check into it.
The 78-74 card was by Judge Bill Miranda who had it for Cornelius Lock. He was overruled however by two scores of 76-76 for the Majority Draw.

Posted by KOFantasyBoxing at 1:13 AM