On this day in fistiana in Las Vegas, the Marvelous One defeated rugged Argentine brawler Juan Roldan to win his ninth successful defense of the Middleweight Championship. Roldan is the one and only fighter to have scored a knockdown versus Hagler, although it was not without controversy. More of a brush-down than due to the force of a punch Hagler is ruled down in round number one. Check it out via the embed below and decide if Referee Tony Perez made an error in ruling Hagler down.

No matter, the Marvelous One went on to administer a thorough and solid drubbing, stopping Roldan in round number 10.

Posted by KOFantasyBoxing at 3:57 PM No comments:

On this day in fistiana, we witnessed the hard-swinging, hard-living Ricardo Mayorga at his destructive best in his title winning effort versus Guyana-born Brooklynite Andrew "6 Heads" Lewis. Mayorga quick and powerful hands along with his relentless pressure was quickly too much for Lewis in this contest for the WBA versions of the welterweight title. Perhaps more significant was the fact that this win paved the way for Mayorga's next fight versus the late Vernon "The Viper" Forrest. Although Mayorga's place among the elite of the sport was somewhat short-lived, his performance in this rematch versus Lewis was one of the best of Mayorga's career (their first contest ended after a severe gash was opened on the face of Lewis after a second round head-butt).

Posted by KOFantasyBoxing at 3:42 PM No comments:

“What can be done about it?” asks Grady Brewer after Adama defeat 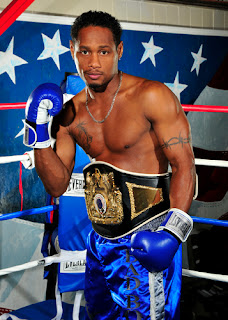 “This is bull. This is horrible. It's why people wanna go to MMA now.”

This past Saturday night Brewer was on the losing end of a 10 round split decision against Osumanu Adama at the Lowell Memorial Auditorium in Lowell, Massachusetts. This writer was not in attendance but descriptions of the card, promoted by Chicago Fight Club Promotions, mention it being replete with delays and disorder. KO Digest’s Jeffrey Freeman described the show as “ragtag” and reported the main event didn’t even begin until after midnight.

“I think the referee was thinking about maybe stopping it, I think it was the fifth round, Brewer recalls. “I wouldn’t want the ref to stop it in that situation on me so I’m not saying they shoulda stopped it. But they coulda probably called it a 10-8 round.  He was pretty much showing that he was out on his feet, he was staggered, he was wobbly. The bell saved him in that round.”

At stake in the match-up were two different straps, of the IBO Inter-Continental and WBC Continental Americas variety, but Adama couldn’t make the middleweight limit and could not claim the titles after the win.

Now forty-two years old, Grady Brewer knows he may not get many more chances like that. He’d made the middleweight limit for the contest but lost his shot in the split-decision defeat. The titles Brewer had gotten even closer to on the scales were once again out of reach after the official decision was read.

“That's what hurts me the most,” said Brewer. “Because it was a title shot, a title opportunity to gather those belts. They were interim belts. But it’s still an opportunity to move on up. And I felt that was my chance to really redeem myself and get back on track.”

Read more »
Posted by KOFantasyBoxing at 8:06 PM No comments: