Josh Crespo in training camp at Ring One Boxing in New Haven, CT

KOFantasyBoxing visited Ring One Boxing on Congress Ave in New Haven, CT, to catch up with featherweight Josh Crespo as he prepares for his 8 round rematch with Nate Green on Thursday, October 5th at Mohegan Sun. Crespo lost a four round unanimous decision to Nate Green in his second pro fight, it was Green's pro debut, and Crespo hopes to avenge the loss next week. Crespo and Green are intra-city rivals, with Green boxing out of Boxing In Faith Gym in the Fairhaven section of the city and Crespo out of Ring One in New Haven's Hill section.

Tickets are available at the Mohegan Sun box office or through TicketMaster.com.

Posted by KOFantasyBoxing at 10:03 PM No comments:

KOFantasyBoxing visited BIF Gym on Grand Ave in New Haven to catch-up with Nate Green as he prepares for an 8 round rematch with intra-city rival Josh Crespo. Crespo trains out of Ring One Boxing on Congress Ave, also in the Elm City. Green and Crespo met back on November 5th, twenty-eleven, Green's professional debut and Crespo's second fight. Green won a four round unanimous decision 6 years ago and hopes to repeat on Thursday night, October 5 at Mohegan Sun. Tickets are available at the Mohegan Sun Box Office or through TicketMaster.com.
Green's last fight was an 8 round UD victory over Emanuel Rivera in Puerto Rico.

KOFantasyBoxing boss Alex Pierpaoli spoke to Green on Saturday the 23rd of September...

Posted by KOFantasyBoxing at 3:01 AM No comments:

Posted by KOFantasyBoxing at 9:07 PM No comments:

Read more »
Posted by KOFantasyBoxing at 5:41 AM No comments:

Posted by KOFantasyBoxing at 5:36 AM No comments:

On Friday night at Foxwoods Fox Theater, DiBella Entertainment put on a seven bout boxing card featuring action in six different weight classes. The assembled enjoyed spirited action from regional stars and rising talent but the card was not without some controversy, especially in the Main Event, which is not always a bad thing in the fight game. Here's a recap:


Bout 1, Raymond Moylette, 139lbs, of Islandeady, Ireland got up from a second round knockdown to defeat Donte Bryant, 138lbs, of Kalamazoo, MI by 6 round split decision. After a cautious first round, Donte Bryant started the second in explosive fashion, cracking Moylette with an overhand right and dropping him in the first few seconds of the round. Moylette rose to his feet and was battered, especially to the body, for the rest of three minutes. But in the third Moylette seemed to come to life, blasting Bryant repeatedly with a hard left hook and doing some good body work of his own. As the rounds wore on both men had their moments in exchanges but Moylette owned the second half of the fight. In the sixth round Moylette
caught Bryant with a short right hand that sent him reeling and for the final minute of the fight Moylette hammered away at Bryant. When the scorecards are announced, judge Richard Flaherty has it 58-56 in favor of Donte Bryant but was overruled by two scores of 57-55 in favor of Moylette.

Bout 2, Nicholas DeQuattro, 140lbs, of Johnston, RI made a successful pro debut over Timothy Wheeler, 143lbs, of New York, NY, stopping him at 2:28 of rd 1. Wheeler charged out of his corner, crowding DeQuattro who met his aggression with his own. Both men got tangled up and wrestled a bit, earning a stern warning from referee Danny Schiavone. DeQuattro drove Wheeler back into his own corner and cracked him with a looping right hand, putting him on the deck. Wheeler rose from the knockdown and the fight
continued but DeQuattro smelled blood and went right to work. Wheeler retreated towards a neutral corner and DeQuattro came after him, slamming with a right left that sent him to the canvas for a second time where Danny Schiavone counted him out.

DeQuattro is now a professional fighter at 1-0 (1) while Wheeler falls to 0-2.

Bout 3, Adrian Sosa, 139lbs, of Lawrence, MA stopped Francisco Medel, 140lbs, of Douglas, AZ, at :30 of round number 3. Switching back and forth from orthodox to the southpaw stance, Adrian Sosa blasted away at the outgunned but bold Medel from the opening bell. Sosa boxed aggressively throughout, pouring on the pressure and hammering Medel to head and body. Sosa scored a knockdown in each round and after the third Referee Al Lo Bianco had seen enough and stopped the bout at :30 of round 3.


Bout 4, Ievgen "The Lion" Khytrov, 164lbs, of Brooklyn, NY defeated Derrick Findley, 166lbs, of Gary, Indiana, by eight round unanimous decision. Returning to the ring for the first time since a January TKO defeat to Immanuwell Aleem, Ievgen Khytrov got right to work applying pressure to Findley in round one and never let up. Khytrov was able to stun Findley early in the first with a short right hand but was never able to get him in danger of going down. Findley, a veteran whose faced a veritable who's-who at 160 and 168, was competitive and durable but was never able to keep Khytrov off or
blunt his offense in any way. In the final round Khytrov drove Findley back along the ropes and punished him with combinations.


Bout 6, Shelly Vincent, 128lbs, of Providence, RI, defeated Angel Gladney, 129lbs, of Columbia, SC by 8 round unanimous decision. Shelly Vincent started slowly in her second encounter with Angel Gladney, Vincent won the 8 rounder by UD in May of twenty-thirteen. In the first Vincent complained as Gladney stepped on her front foot several times. By round three Vincent was warmed up and the punches in bunches she brings to each fight were on display. At age thirty-eight, Vincent is in the twilight of her career, but tonight the double left hook and the rib-busting shots to the mid-section that made her famous got the job done in dominant fashion. In the final round Gladney gave as good as she got, firing back furiously despite being outgunned. The crowd was on there feet at the final bell. After 8, the scores were 80-71, 80-72 x 2. Shelly Vincent raises her record to 20-1 (1) while Angel Gladney's drops to 9-13-1 (6).


Bout 7, Niall Kennedy, 224lbs, of Gorey, Ireland defeated Alexis Santos, 221lbs, of Lawrence, MA by split decision in an exciting heavyweight main event. Santos got off to a strong start but Kennedy used clever boxing, good body punching and his husky frame to wear Santos down. The bout was not without controversy as Santos was warned repeatedly for low blows that seemed to be hitting Kennedy in legal territory along the belt line of his green and white trunks. With referee AJ Lo Bianco watching Santos for an infraction, he found one in the ninth that also seemed questionable and took a point from Santos. In the final round it appeared Santos deserved credit for a knockdown when he nailed Kennedy and sent him back into the ropes which kept his sagging frame from going down. When the scores were read they're 96-93 for Santos, overruled by two of the same scores the other way, 96-93 x 2 for Niall Kennedy. Mathematically, even had Santos been given credit for a knockdown in the final round, he was still to far behind to land a draw.

Posted by KOFantasyBoxing at 8:27 PM No comments: 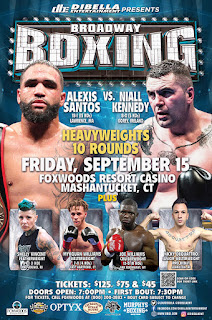 
Take a look at tonight's Bout sheet for DiBella Entertainment's Broadway Boxing coming to you LIV tonight from the Fox Theater at Foxwoods Resort and Casino.


We'll be ringside at Foxwoods and will be live tweeting @KOFantasyBoxing

Tickets for tonight's Broadway Boxing event, which is promoted by DiBella Entertainment in association with Murphys Boxing and presented by Nissan of Queens, Azad Watches, OPTYX, and Christos Steak House, are priced at $125, $75 and $45. Tickets can be purchased online at Foxwoods.com, Ticketmaster.com, by calling 800-200-2882, or visiting the Foxwoods box office. Doors open at , with the first fight scheduled for .

All Bouts Subject to Change

Boxing fans can watch the entire card streamed live on FightNight Live on Facebook at this link starting at :
https://www.facebook.com/FaceFIGHTNIGHTLIVE/videos/692372797623396/
Posted by KOFantasyBoxing at 4:06 PM No comments:

Get tickets for the Two-In-One of Live Boxing @ Twin River and the Caenlo-Golovkin PPV @ Murphy's Law for just $55 here
Posted by KOFantasyBoxing at 3:39 PM No comments:

Posted by KOFantasyBoxing at 1:36 AM No comments:

Posted by KOFantasyBoxing at 1:35 AM No comments: 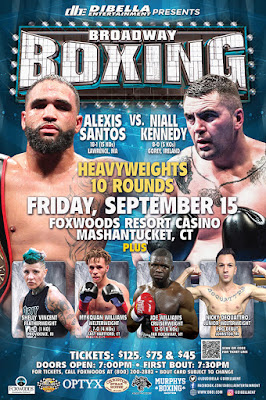 Shelly Vincent looks for a tune-up victory in her second encounter with veteran Angel Gladney. The favorite scored a win over Gladney in May of twenty-thirteen at . This will be Shelly Vincent's first time through the ropes in twenty-seventeen and her first bout in 9 months. Vincent still hopes for a shot at redemption in a rematch with rival Heather Hardy.

Hartford's own Mykquan Williams returns to action in front of his CT fans with his third time through the ropes this year, this time versus 4-2-1 (2) Andrew Rodgers of Elkhart, Indiana.

The summer of 2017 has been a wild, tumultuous ride for Jimmy Williams with one more unexpected stop on the road to stardom.

Rodriguez's original opponent, Khiary Gray of Worcester, Mass., sustained an injury during training camp, so now the "The Beast" gets his crack at the prestigious WBC U.S. championship in a 10-round welterweight showcase against the unbeaten Williams (14-0-1, 6 KOs), who has won 10 consecutive bouts dating back to 2013.

The entire 12-fight card airs live on Facebook via FIGHTNIGHT LIVE. CES Boxing debuted on the fan-friendly streaming platform Aug. 26th in and set a Facebook record with 201,935 views, more than tripling the previous high of 63,000.

Read more »
Posted by KOFantasyBoxing at 11:19 AM No comments: