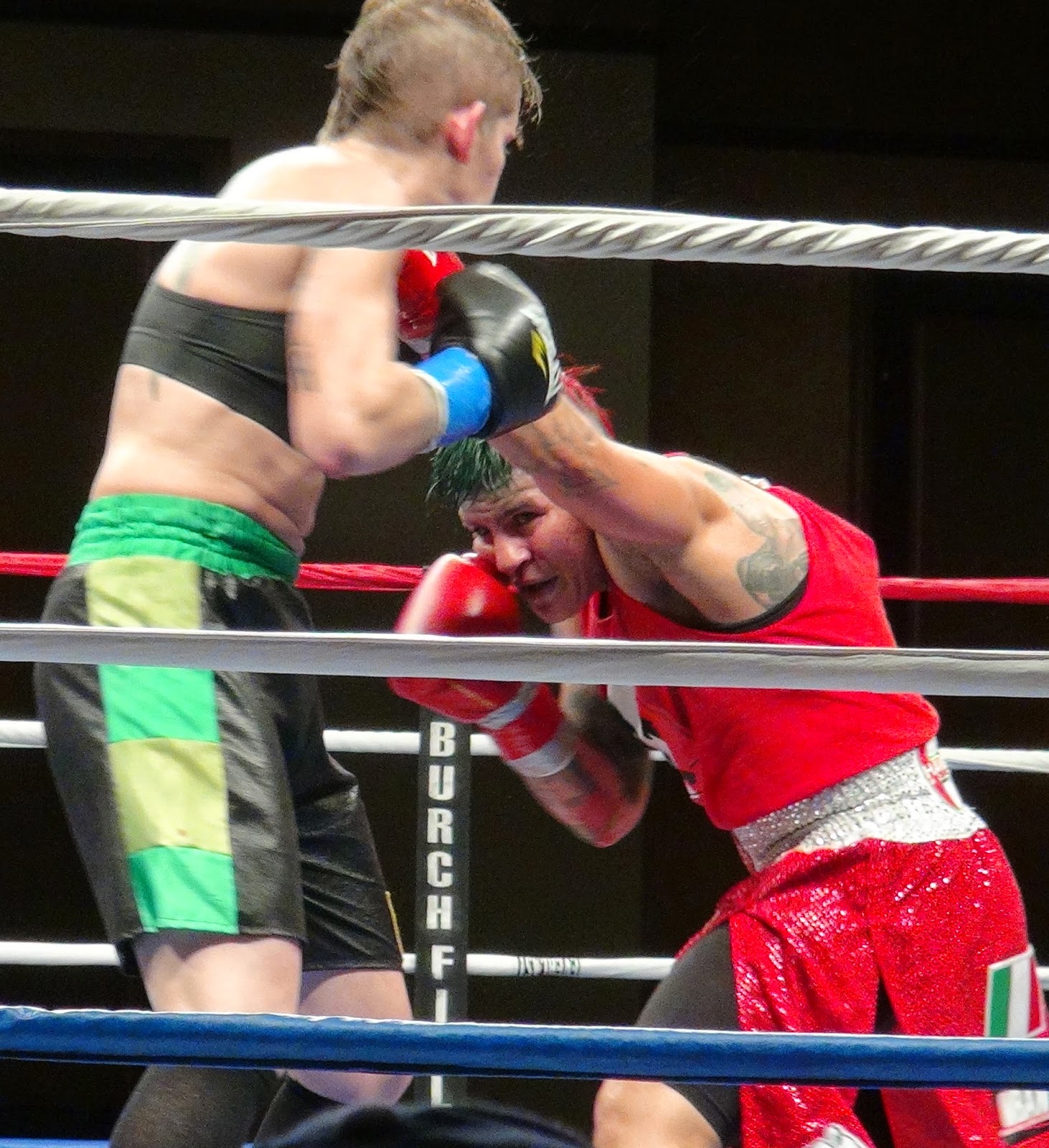 Shelito Vincent pounded out a 10 round majority decision victory over rugged Jackie Trivilino to pick up the vacant UBF World female super bantamweight title on Friday night at in . The exciting main event capped an 8 bout card and the sixth and final show for promoter CES Boxing in 2014.

Vincent, 125lbs of looked the part of champion in scoring the most significant win of her career with a career-best performance. Jackie Trivilino, 122lbs of , started fast, blasting away and scoring early with both hands, but Vincent's pressure, work-rate and withering body attack was the difference in a close 6-4 type fight.

Trivilino faded in rounds 7 and 8 and that's when Vincent's double hooks landed heaviest, a testament to her improving power and conditioning. This win was a meaningful one for Shelito Vincent as Trivilino battled Heather Hardy, the opponent Vincent has been hoping to goad into a fight, in June, losing a 7 round technical decision to her in a fight many felt Trivilino deserved.

In other action, one hundred sixty-six pound, Angel Camacho of , returned to the ring to the first time since December of 2011 with a solid though less than thrilling win over Paul Gonsalves, 168lbs of . Angel Camacho Jr is now 13-0 (4) and Gonsalves fell to 7-5-1 (3).

Fighting for the fourth time this year, welterweight Nick Delomba 147, of Providence, R.I. defeated Lazar Stojadinovic, 147 lbs of Miami, Fla. by six round majority decision. Scoring a knockdown in the third, it looked like DeLomba might score his first knockout but Stojadinovic was sturdy and determined and weathered the storm to finish strong. After six the judges saw it 56-56, 57-55 and 58-55 in favor of Nick DeLomba by majority decision. Nick Delomba improved to 6-0 and Lazar Stojadinovic dropped to 1-2-1.

Zachary Christy, 169lbs of Warwick, RI dueled with Sergio Cabrera, 170 of Somerville, MA, in a posturing, missing, tangling fight that was short of damaging punches from either fighter. At the end of four this writer though Christy had dominated the ugly 4 round affair but the judges were unanimous in calling it a 38-38 draw. These two head out, in opposite directions hopefully, with Zac Christy at 1-0-1 and Sergio Cabrera still without a win at 0-3-2.

Heavyweight Julian Pollard, 253lbs of Brockton, MA stopped Arthur Saribekian, 240lbs of Providence, RI, in one round after dropping him and slicing his eye with what was likely a left hook. Saribekian was up from the knockdown but his corner stopped it before their man got badly hurt. Ref Joey Lupino made it an official TKO at 2:47 of round number 1. Pollard is now 5-0 (5) while Saribekian is 23-6-1 (18).

Middleweight, Khiary Gray-Pitts, 160 of Worcester, MA met Vincent Floyd, 164, of Philadelphia, PA in an action loaded 4 rounder. Both men exchanhged freely with Gray-Pitts landing the heavier blows throughout. When the bell sounds to end the 4 round contest they're still exchanging but it's Gray-Pitts who came away with the lopsided unanimous decision, winning 40-36 on all three scorecards. With the victory Khiary Gray Pitts improved to 3-0 (1) while Vincent Floyd fell to 1-1-1.

The evening got off to a rocking start when Oscar Bonilla, 135lbs of New Haven, CT,  banged and battered with Scott Sullivan, 135.5lbs of New Bedford, en route to a fist-flying 4 round unanimous decision win for the kid from the Elm City. Scott Sullivan left at 1-1, 1 KO while Oscar Bonilla improved to 3-0-1.
Posted by KOFantasyBoxing at 3:53 PM