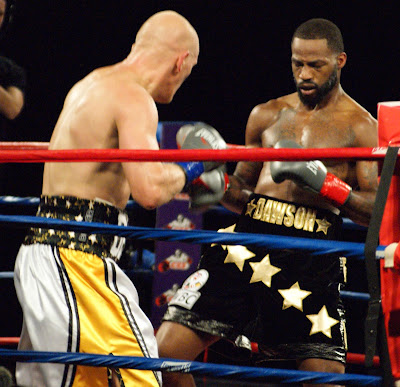 and more from Hartford, CT

first up, super welters, 153lbs, from Boston, MA, Maceo Crowder versus 153lbs, from Springfield, MA, Jalen Renaud
Jaylen Renaud scored a knockdown in the first but it looked like Maceo Crowder won that second round, catching Renaud's jabs and sloughing off his power shots, countering in return.
Renaud is the busier fighter here but Crowder may be landing smarter with well-placed counters and great defense. Renaud landing flashier shots for sure.
The officials see it 40-35 x 3 in favor of Jalen Renaud. (This observer saw Crowder winning the second and third for a total of 38-37 for Renaud, FWIW.) Crowder fought like he was in a six rounder. More to come from here...

Bout 2, Leandro Silva of Sao Paolo, Brazil (via Boca Raton, FL) 176 lbs, versus Jahvel Joseph 171lbs, of Bronx, NY. Joseph if making his pro debut. 4rds, light heavies #Boxing #DawsonGrachev
Joseph the taller, longer, quicker fight through round 1. Landing slashing shots from a distance.
Joseph in control through two.
That's the end of Joseph versus Silva. Joseph should pick up his first unanimous decision in his first outing as a pro. He controlled the fight from the start, pressed the action and never let up. Silva got slammed with lots of clean shots that to his credit, never hurt him
40-36, 39-37 x 2 all in favor of the Bronx, NY's Jahvel Joseph. Twenty-eight! is what his supporters keep shouting, not sure what it means. #Boxing #dawsonGrachev

Bout 3, Steve Garagarza of Houston, Texas versus Nathan Martinez, 123lbs, of hard-hittin' New Britain, CT 4 rounds, super bantams #DawsonGrachev
That was a heated first round! no feeling-out period for these two, they got right to slugging. Martinez landing heavier but Garagarza may have landed more frequently. Martinez sunk several hard left hooks into the midsection of Garagarza.
Lots of toe-to-toe action in this one. Martinez looks to be landing harder and more frequently but Garagarza is fighting his heart out despite being outgunned.
Every question Garagarza is asking of Martinez here, the New Britain-ite is answering back and HARD!
Bantams are beautiful! great exchanges here.
Wow, big final round for Martinez. Looked as if he almost had Garagarza down but no such luck. He bashed him all around the ring though. Martinez will take this by UD. waiting on the scorecards...
40-36, 39-37 x 2 all in favor of Nathan Martinez of New Britain, CT #Boxing

*authors note—missed the fighter introductions for this fight and confused the 2 combatants, so everything said about Mitchell is actually meant about Collier, and vice versa. My Apologies.
Bout 4 is up now, Sharad Collier, 133lbs of Hartford, CT versus Glenn Mitchell, 131lbs, of Steubenville, OH, 4 rounds, lightweights #DawsonGrachev
Wow, two knockdowns in that first round, one for each fighter! Mitchell down on what looked more like a slip but he rallied to hurt Collier badly and put him down. Collier tackled Mitchell to try to avoid being stopped. 10-8 round for Mitchell.
Glenn Mitchell is 3-3 with 3 stoppages to his credit. It'd pretty clear he's a heavy puncher. I thought he won that second round as well which gives Hartford's Collier a very deep hole to climb out of.
If Glenn Mitchell was in a little better cardiovascular shape he might have been done by now. He lands heavier every time he connects but Collier has been able to use his legs enough to keep Mitchell chasing and missing just enough to last.
that's it, Ref. Mike Ortega calls it off with Collier getting slammed with power shots. Collier protests but he took lots of head-spinning blasts and could not keep Mitchell off of him. Hard-punching, head-thumping Glenn Mitchell improves to 4-3 (4)

Up now, @JimmyQSWilliams of New Haven, CT versus Jose Medina of Guadalajara, MX
Williams landed a heavy left hook that stunned Medina and sent him back into the ropes. Quiet Storm controlling the action with a busy jab and stinging follow-up shots.
Medina landed a shot of his own in the last ten seconds of the third that got Williams attention. Medina is turning it up.
Jose Medina won that fourth round. He's landed several good jabs and made @JimmyQSWilliams pay for missing with power shots.
Williams came back with a big fifth round, staggering Medina with an overhand right in the final ten seconds
big round six! @JimmyQSWilliams cracked Medina with a left hook that sent a wad of blood and spit out of his mouth and down to the convention center floor.
58-56 for Medina, 58-56 for Williams and 57-57 even, this bout is a DRAW!
This observer saw that bout 58-56, or 4-2 in rounds, in favor of @JimmyQSWilliams but 2 rounds were pretty close so I guess the draw isn't terrible. #boxing #DawsonGrachev

here comes the co-featured bout of the evening, 16-0 (10) @Cassius_Chaney of New London, CT battles Santander Silgado of Arboletes, Columbia, 6 rounds, Heavies
BOOM!!! goes the dynamite! @Cassius_Chaney fired a monstrous right cross behind two pawing jabs that put Santander Silgado down and out in round number one. The official time was 1:03. Chaney improves to 17-0 (11)

that was just an excessively long National Anthem. It really seems like all these goddamned singing contest shows have totally fucking ruined singing. Not everyone is Aretha Franklin. Stop fucking over-singing. It's really hard to stomach #gottachill #jussayin

Here comes the Main Event! @OfficialBadChad, 175lbs, out of New Haven, CT versus Denis Grachev, 175lbs, out of Chaykovsky, Russia #DawsonGrachev #Boxing
Referee is Mike Ortega
Dawson is working with trainer Brian Clark of Ring One Boxing in New Haven. That's a good sign as he was the first to develop Chad as a kid & is probably best trainer in CT
Very little landed in that first round. Dawson the busier, pawing at Grachev with lots of southpaw jabs.
very good second round for @OfficialBadChad He thumped Grachev with straight lefts and pressed him throughout.
Grachev went down sloppily after stepping on Dawson's foot. He seems to have gathered himself. Oops, now Dawson is down from a trip as well.
@OfficialBadChad still very quick of both hand and foot, even at 37 years old. Landing speedy bolts. He's looking for a spot for a right uppercut but hasn't quite found it yet. 4th round starting now…
That was a dull fourth. Very little landed for either guy. But Dawson had the edge in punches thrown and making Grachev miss.
@OfficialBadChad playing possum a bit in the fifth, letting Grachev swing at him while on the ropes. Dawson countering with harder shots now. And he's landed several uppercuts, but grazing shots.
Grachev had Dawson momentarily stunned! They're slugging away. Dawson has regained his composure by round's end but Grachev took that one.
@OfficialBadChad stings Grachev repeatedly with single lefthand blasts in round seven. One round to go…
This one goes the distance. Dawson should pick up the workman-like victory. Should be Unanimous.
Grachev would be wise to open up with both hands here. He knows he can hurt Dawson.
Judges saw it 80-72 x 2 and 79-73 all in favor of the Elm City's @OfficialBadChad now 36-5 (19) and the new WBC/USNBC light heavyweight titleholder #boxing #DenisGrachev
"I'm 37 years old but I feel like I'm twenty-five." -@OfficialBadChad

That's all from here, fight-fans! Thanks for following along! #DawsonGrachev

Posted by KOFantasyBoxing at 5:05 PM